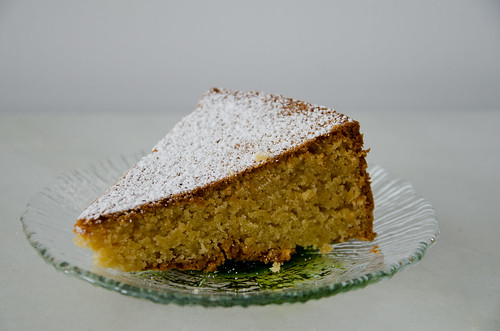 A couple of weeks ago, while picking up a coffee at an East Village cafe, the Bluebird Coffee Shop, I ate the best almond cake of my life. The experience was so monumental, that I couldn’t stop talking about this amazing cake. I talked about it to anyone who’d listen, I’d use superlative adjectives, I’d gesticulate wildly. You’d be surprised by just how few people want to hear about the “best almond cake” they’ll ever have. Kind of blew my mind.

I became besotted with this almond cake so much, that I did something I’ve never before in my food blogging and writing career have done—I gathered enough courage to ask the café, outright, for the recipe. And lo!—they gave it to me! 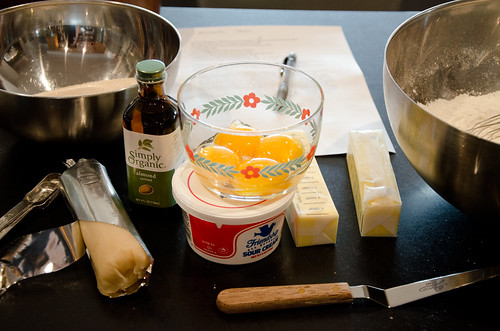 This kind of forward behavior is not my usual M.O. For those of you who know me well, know that one on one, I can prattle away about various ephemera, say the magic behind natural lacto-fermentation, so much so, that sometimes I forget to come up for breath; but put me in an unfamiliar environment, and I get very quiet and hang back. I suffer from a ridiculous case of the shy.

Lately, however, I’ve been doing those things that make me uncomfortable; I don’t know if it’s the water I’m drinking, but I’m (trying to, anyway) putting myself out there. I’ve asked intimidating (to me) people for meetings; I’ve inquired about a stage opportunity (post recovery, of course!); and when I lost sleep over this cake, I decided that I wanted the recipe, even if I had to ask for it. The way I reason, when you ask for something, the worst answer you will hear is “no”; and the best… the best will be an unequivocal “yes”. Personally, I’d rather be denied something than never know the answer. Rejection can be hard, but at least it’s something definite. 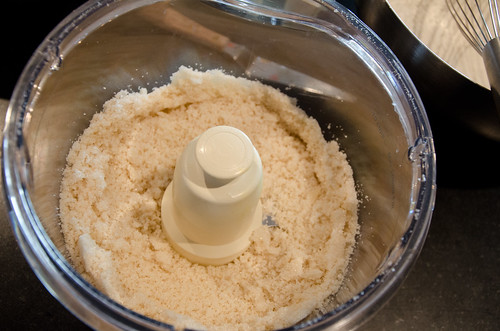 The week after my cake obsession started, I returned to the café, armed with a little bit of chutzpah, begging (and you should have seen the begging) for the cake recipe. My husband will forgive me, but I did what I had to in order to get the job done. Mostly it was a little flirting and a lot of eye lash batting. Thankfully, I wore mascara that day, otherwise my blond lashes would’ve done little in the way of charming the barista. He disappeared for a few minutes only to return with a binder, presumably of recipes.

“The chef says I can give you ingredients only, and you have to do the rest,” he said as he jotted down the ingredients on an order slip.

All I could do was thank him from the bottom of my heart. After all, the ingredients were what was critical here. With ingredients, reverse engineering this almond cake was, by comparison, well, a piece of cake. In a way, getting only the ingredients was so much better than getting the recipe outright. I had to work for it. It made the process a bit more fun, like a treasure hunt.

The testing went beautifully – I really had to just adjust the proportions once (for a smaller home batch) and the cake was perfect. But as I was sliding the cake out of the pan onto the cooling rack, my left wrist (the one with the ginormous scar) gave way, and I dropped the cake on the counter, causing the cake to split in the ugliest possible way. There, see it? Tell me that’s not hideous. In earth-quake glossary terms, the cake just had a strike-slip fault. Totally normal, folks, just your average strike-slip cake separation! 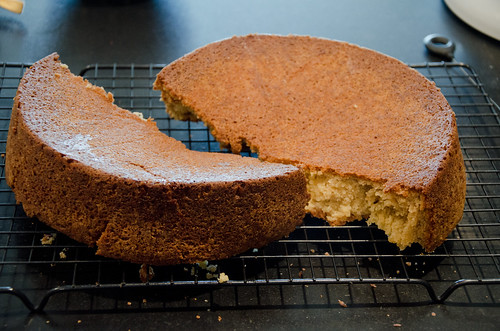 There might have been some expletives following the break, and Andrew rushed on the scene to see what caused me to erupt in such a way. “Well, that’s too bad,” he said examining the two jagged halves, “It appears that, unfortunately, you’re going to have to make that cake again. And I’ll have to eat it.”

It is rather unfortunate, but Andrew is right—I am so going to have to make this cake again. It’s really just too bad. 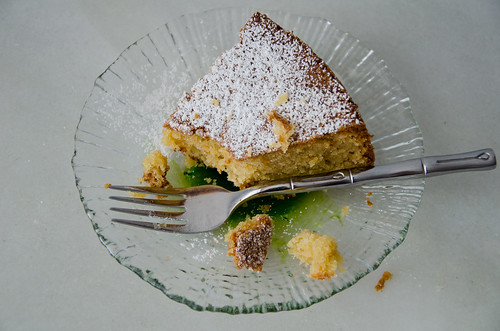 P.S. As I write this, the news is on in the background and we’re watching the effects of Superstorm Sandy. It’s mind-boggling: the devastation and destruction the storm has left. Many of my friends are without power; my husband’s boss is in a building entirely surrounded by water. We, on the other hand, got freakishly lucky and are counting our blessings. If you’re in the affected areas, I hope you get help soon and I hope that you are, in the meantime, safe and sound.

If you do wish to help, here’s a link to Red Cross – as that is probably the most effective way.

I found almond paste made by Odense, a Danish company, at my local Whole Foods, but I also have seen it sold in the supermarkets all over New York. I have a feeling, however, that there are better quality almond pastes out there, though they might not come in the very size you need, so you’ll have to measure out.

Bear in mind, that that cake sinks somewhat. This happened to the cake at the café as well as when I made it. I don’t mind this sinking, or as I like to call it, the “slumping” one bit – in fact, it looks kind of cozier that way. Don’t let the cake cool longer than 10 minutes in the pan before inverting. The heat from the pan will make the cake drier.

(UPDATE 12/29/12: I’ve made this cake numerous times since posting – and each time it sank in the center. A reader wrote to me that his cake sunk a lot, and I went on a mission, asking everyone who was willing to listen, about the cake sinking and as to why. In the end, I arrived at this conclusion: the cake needs more protein to withstand sinking – without egg whites, it’s too delicate. However, the tradeoff to a sunken cake is a rich, tender crumb which you don’t get as much when using whole eggs.

UPDATE 1/9/13: In my endless quest to figure out if there are any other cakes made with yolks only, I finally stumbled upon Amanda Hesser’s version from “Cooking for Mr. Latte”. Her ingredients (and proportions) are nearly identical to my version and at the end of the recipe, she writes, “Yield: one sunken but delicious cake.” I exchanged a few emails with Amanda and she confirmed it: the cake, albeit the most delicious she’s ever had (I concur), always sinks.)

I will make the cake again and swap in a prettier picture for the mess above, but I wanted, so badly, to share this cake with you because it is just so incredibly delicious that I can’t delay any longer. Trust me, this cake is the only almond cake recipe you’ll ever need.

1. With the rack positioned in the middle, heat the oven to 325 degrees F (click here for conversion to Celsius/gas mark). Butter a 9-inch springform pan and line the bottom with parchment paper.

2. In a large bowl whisk together flour, baking soda, and salt until combined. In a food processor fitted with a blade process the sugar and almond paste until combined. In a stand mixer fitted with a paddle attachment, cream the butter, on medium speed, for 1 minute. Add the almond mixture, a little at a time, to the butter and mix on medium speed for about 8 minutes. With the mixer set at medium speed, add the yolks, 1 at a time, mixing well after each addition until each yolk is incorporated. Add the sour cream and the almond extract and mix until incorporated. Set the mixer to low speed and add the flour mixture, in 3 batches, until just combined. Be careful not to overmix.

3. Transfer the batter to the pan, and using a spatula, smooth out the top. Bake for 1 hour or until a toothpick inserted in the center of the pan comes out clean. You should see the cake pulling away from the sides of the pan, and, the top springs back up, if you push down with your finger. Transfer the cake to a cooling rack, and let rest for 20 minutes before turning the cake out onto the rack. Let cool for 1 hour. Dust with confectioners’ sugar, if you like, before serving.