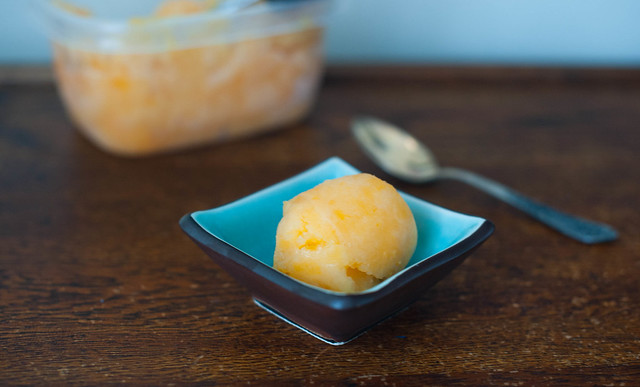 I might have just figured out a loophole in this whole no-drinking-on-the-job thing. Suppose it’s a weekday, mid-afternoon, and you need a bit of a pick-me-up. You might be working in an office somewhere or, like me, at home. But unless your job is to review cocktails and spirits, it’s unlikely that you’re going to fix yourself a drink midday. Life, for better or worse, isn’t an episode on Mad Men, and if it were, you’d probably be drinking whiskey or vodka straight or on the rocks.

But, what if someone handed you sorbet with the same ingredients that go into a mimosa? You’d have it, and no one would ever even think ill of you.

You have David Lebovitz to thank for that. I’m just a humble messenger.

I don’t know when I first happened upon David’s blog, but it was awhile ago. And by awhile, I mean years and year. In blog years, we’re talking eras. At the time, there were only a handful of food blogs out there. This was before food blogs became book deal fodder, and those us of who were experimenting with the online medium were seeking a creative outlet, a way to communicate. For me, cooking proved to be an escape from Excel and stock market trends (yawn). I also desperately needed to be alone after too much office time with people at work most of whom weren’t even that nice to me. I should’ve known early on I wasn’t made for the corporate world, but I didn’t think there were other options available. I didn’t have the luxury of taking a year to figure out what I wanted to become because there was no one who would’ve (could’ve) supported me.

Cooking, writing, and reading blogs like David’s made me feel like there was a place for me. It took a few more years, and some gentle encouragement from Andrew, not to mention great mentors, for me to have a succinct understanding of what I wanted to do, and in some ways, I still define and redefine it, but the general direction is clear.

Reading David’s blog was like getting a little piece of Paris in my kitchen. Whenever he wrote about his singular counter, I’d turn to look at my own kitchen – a tiny, light-deprived Upper East Side apartment where I lived next door to a psychic – with its own tiny, singular counter, visibly sloping floors, and a window facing an interior building wall covered entirely in pigeon shit, and I’d think, “Just pretend you’re in Paris and Poilâne is around the corner.” I’d tinker with his recipes in my kitchen, and by listening to his helpful, friendly voice on the page, I taught myself about caramel and beurre salé, chocolate and truffles, to name a few. And for a short period of time, I’d be transported out of what I found to be somewhat meandering, stressful existence. 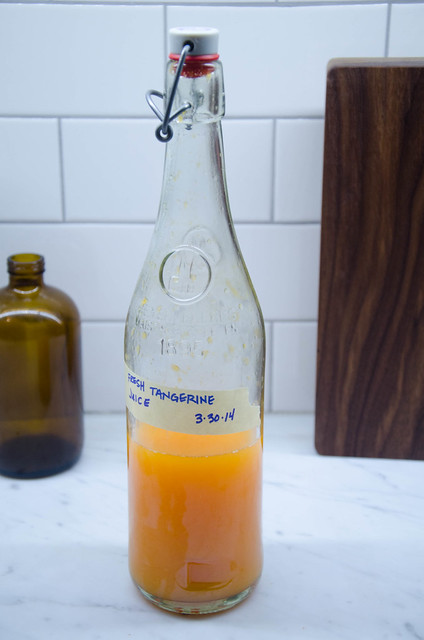 David demystified ice cream making for me and got me hooked on the homemade thing. I bought an ice cream maker and dutifully kept the bowl in the freezer at all times. I learned the difference between French and Philadelphia custard and realized, along the way, that I had a deep preference for the former than the latter. In some strange way, perhaps, he’s one of the biggest reasons, I am now working on not just an ice cream book, but an ice cream book for my favorite ice cream makers! How Van Leeuwen’s team and I kept meeting and re-meeting is one of those funny, fate-intervening sort of things. We’ll save that story for the book – it’s a good one.

So, when David’s latest book, My Paris Kitchen, a beautiful tome filled with stories, recipes, and beautiful, unfussy, unprecious photography, arrived at my door the other day, what I did is something I don’t usually do. I literally put down all my work, shut off my computer, and sat on the couch for a few hours reading the book, making notes, underlining, flagging. There are a dozen or so recipes I want to try right away: his coq au vin, his caramel pork ribs, his pain d’épices (beautifully profiled by Tim), just to name a few. But as I was flipping the book and reading through the recipes, I had the itch to make something immediately. It was almost meant to be – Tangerine Champagne Sorbet recipe looked too good to pass up. And also, there was almost that meant-to-be feeling.

Last week, Andrew and I hosted brunch for our dear friends Vanessa and Tiff, where we served, among many things: this carrot avocado salad, these scones, and this almond cake (it cratered as per my warning in the recipe – as expected – but we still couldn’t stop eating it). And because what’s brunch without mimosas, I squeezed some tangerines for the occasion. But despite our best efforts, we still only managed to get through half of the juice and there was, fortuitously, leftover prosecco. I refrigerated both and figured should I need a little pick-me-up in the middle of a weekday (kidding!!) it was useful to have on hand.

I’ve started referring to this sorbet as Mimosa Sorbet, and should you find yourself in excess of the below ingredients, they are pretty stunning whirled together and frozen, not to mention you waste nothing (as if most sane people would ever refuse an additional mimosa). The champagne (or in my case, prosecco, since I’m allergic to the real deal) gives the sorbet a less cloying, more sophisticated feel. It’s the kind of thing I envision serving to my guests on New Year’s Eve, or perhaps at the end of a long, fancy dinner. Or, you know, I could just keep it for myself and have spoonfuls of it in the middle of the day. Who’d ever judge me for having sorbet in the middle of the afternoon?

I loved David’s original version, but I wanted the taste of tangerines to come through more, and the alcohol – less (clearly most people reading this will find my priorities wanting), so if you want to up the champagne level, 1 cup is what David recommends. Be sure to let sorbet stand at room temperature for about 7 minutes before scooping.

1. In a large saucepan set over low heat, warm ½ cup (125 ml) of the tangerine juice with the sugar, stirring until the sugar is completely dissolved. Remove from heat and stir in the remaining tangerine juice. Add Champagne, transfer to a container and chill thoroughly.

2. Freeze in an ice cream maker according to the manufacturer’s instructions. Note, this sorbet will be a little softer because of the alcohol content. However, it will be lovely and scoopable once completely frozen.