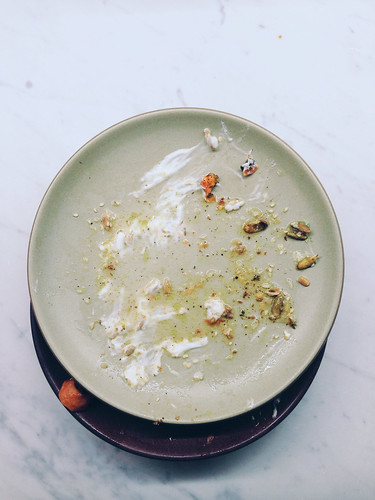 I was lucky to do a trail at ABC Kitchen about a year ago. It was made through a connection of a friend who kindly arranged for me to come in for a day. Normally, ABC Kitchen only lets culinary school graduates in their kitchen, but they made a special exception for me, or so I was told. Years ago, the drama department at Carnegie Mellon bent the rules for me as well, letting me take some classes in their closed-to-non-majors program. I’d like to say I have amazing powers of persuasion but that would be wishful thinking; I think I just got lucky. In any case, I got to take classes with this guy among other talented folks, and I’m tickled pink that he’s doing so well. Go Josh!

I had hoped, before my trail, that I was going to impress the ABC Kitchen folks so much with my work ethic and dedication that they’d let me come in for a stage, if only for a few weeks. I wore my kitchen clogs, got my knives sharpened, and even brought tweezers (for plating) in my knife bag. I fancied myself very prepared. 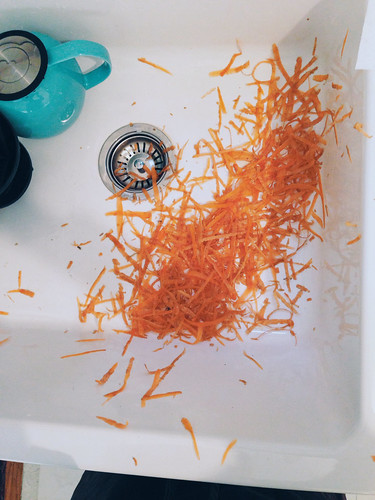 But despite the fact that Chef Dan Kluger, unprompted, praised my brunoise skills (!!!), my trail lasted a day, and then I was sent home. I did, however, eat very well during my day there.

I was assigned to the garde manger station – cold prep – salads, appetizers, and the like. It was a good way to get started in a kitchen that is busy all day – and I worked the morning/afternoon lunch shift before I did some prep work (for dinner shift) downstairs in the basement. 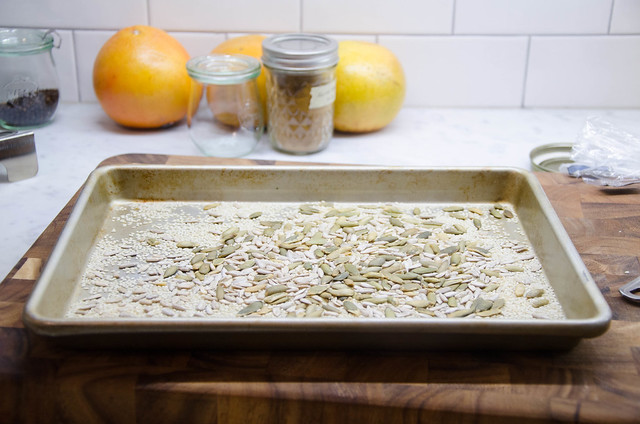 Restaurant kitchens are intense, fast-paced, exacting places. They are hierarchical and there’s no hand-holding or many niceties involved. You do your work. You do it well. You do it fast. Your feelings get hurt and you get over it. Later. Rinse. Repeat. The pace and hierarchy reminded me a little of investment bank work – so it was a “natural” adjustment. I’ve done that before but instead of knives and ingredients, I was wielding spreadsheets and powerpoint presentations. 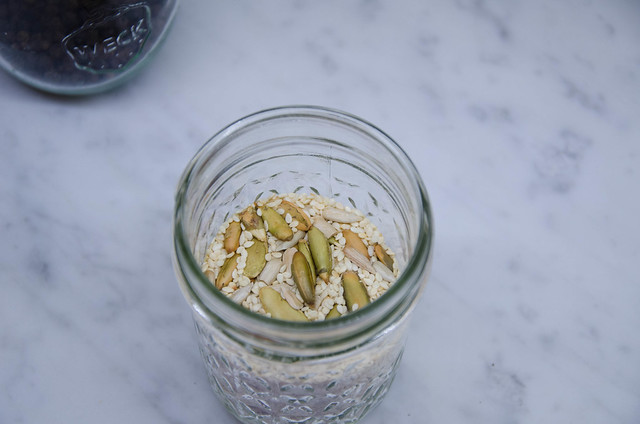 One of the dishes that I had to make all day was this incredible carrot avocado salad. The carrots were marinated and roasted, paired against creamy avocado, and finished with punchy sprouts and crunchy seeds. There was a tiny dollop of sour cream to give a bit of a cool and tang. I had three minutes before lunch service started to scarf a few bites – you were encouraged to taste what you were serving, otherwise, how else would you know how to get it right every time – and the salad was just perfection. And of course, I wanted to write about it here.

Except I had signed a waiver that promised I wouldn’t share the restaurant trade secrets, and because I was so grateful to be there if only for a day, I was determined to keep my word. 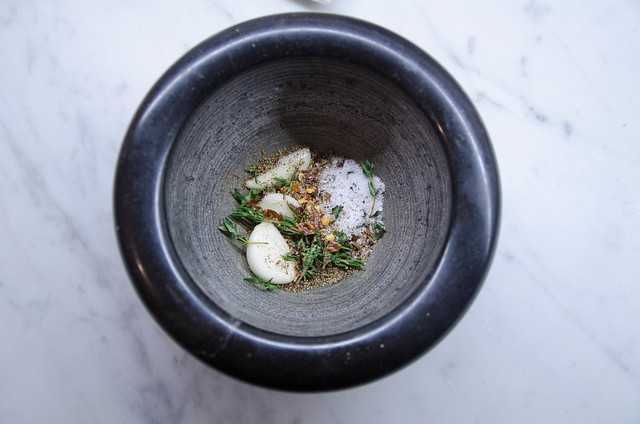 Only in the absence of something do we finally know how much we love and miss it. Life without a kitchen became pretty difficult, and not only because we subsisted on toast and take-out, and had to make our coffee in the bathroom. I missed the physical act of moving in my kitchen as I cooked. Opening drawers, pulling out bowls, stirring, kneading, tasting. Those in-between actions that produced a meal – I missed those the most. And when my kitchen was finally finished, I had to race to the finish line testing recipes for a cookbook I was working on, which was great and everything, but it is quite different than cooking, creatively, for yourself. There is a totally different rhythm to it. 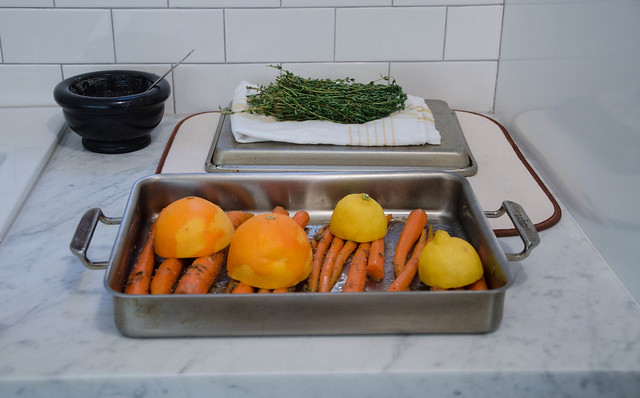 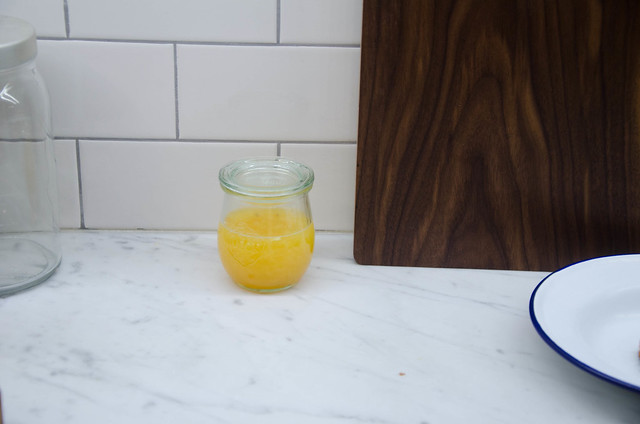 And so this salad is one of the first things I’ve made that’s been just for the sake of making something. Not for a project, not a quick weeknight dinner – just something I’ve been wanting to make for a year, see the process from start to finish, and see if it tasted as I remembered it (it did). It’s a little time consuming for a weeknight salad, but if you break it up into pieces – like, cook the carrots while you’re cooking dinner and assemble the salad the following day – then it’s more than manageable. And I promise you, it’s totally worth it. It’s so amazing, that both times I made it, I ate it without remembering to take a picture. If that empty plate above is not proof enough, I don’t know what is.

This salad is just about perfect as is, so I made minimal adjustments. The crunchy seeds and the marinated carrots playing against the creamy soft avocado is sheer perfection. Chef Dan Kluger knows his way around a vegetable, so if you’re ever contemplating a vegetarian meal in a non-vegetarian restaurant, ABC Kitchen is one of your best bets. Oh, and meat eaters, not to worry – he does magical things with animal protein as well. For this recipe here, you will make more crunchy seeds than you need, but it’s a nice thing to have around and sprinkle, liberally, on salads of all kinds. If you don’t these in your pantry, then divide the amounts by 4 and you should get, roughly, what you need just for this salad alone. I upped the amount sour cream from 1 teaspoon per plate, to 1 tablespoon. As a Russian, I can’t fathom wanting to eat only a minuscule dollop of the stuff, but by all means, do what makes you happy.

Make the Crunchy Seeds:
1. Preheat the oven to 350 degrees F; position the rack in the middle. Spread seeds in a single layer on a shallow baking sheet, Bake, stirring occasionally, about 5 to 7 minutes, until lightly toasted and golden, but not golden brown. Transfer to a place and set aside. Keep the oven on.

Make the Salad:
2. Bring a large pot of water to a boil. Add carrots and cook until a knife pierces them easily, about 15 minutes. Drain and arrange carrots in a single layer in a parchment-lined medium roasting pan.

3. Meanwhile, in a small dry pan set over low heat, toast cumin seeds until fragrant, about 3 minutes. Transfer to a mortar and pestle, and add garlic, thyme, chile flakes, 1 ½ teaspoons salt, and ¾ teaspoon pepper. Pound until crushed and pasty, add vinegar, and ¼ cup of the olive oil, and continue pounding until well-mixed. Spoon the cumin mixture all over carrots and roll carrots around so they are well-coated with the marinade.

4. Cut the whole orange in half, and arrange 2 of the orange halves and 2 of the lemon halves over the carrots, cut-side down. Roast for about 25 minutes or until carrots are golden brown. Transfer carrots to a platter.

5. When cool enough to handle, squeeze the roasted orange and lemon into a small jar, and squeeze out the remaining citrus. You should have between ½ and ⅔ cup of blended citrus juice. Measure out ¼ cup of the blended juice (reserve the rest for another use – perhaps to be used as dressing elsewhere?), season with salt and pepper, and whisk in the remianing 2 tablespoons of oil until emulsified. Drizzle some of the dressing over carrots reserving some for the next step.

6. Arrange carrots on 4 plates. Divide avocado and sprouts across and place on top of carrots. Drizzle with the reserve dressing. Place a dollop of sour cream on top of each mound, then sprinkle with seeds. Serve immediately.