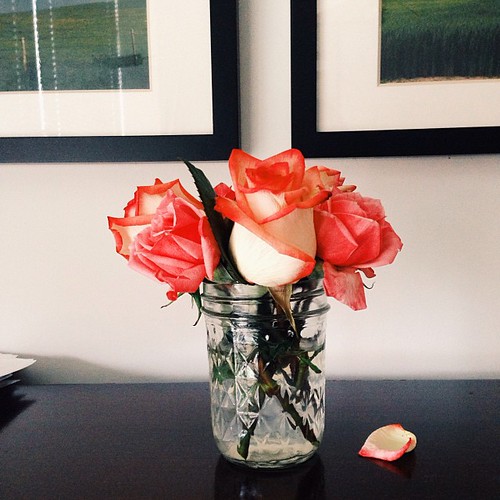 I hope you’ve all had a good week. Mine did not go exactly as I planned. On Sunday morning, in hopes of incorporating more exercise into my life, I went to yoga, which as I wrote about before, didn’t go exactly as I had hoped, but that was okay. I went, I was happy. After yoga, I had to run a fool’s errand and purchase a new wireless router as ours had mysteriously died. A fool’s because I could have done it much earlier – but like Cassandra’s predictions, mine weren’t listened to (grumble). It turned out, after all, that it wasn’t our entire building without internet – just our apartment. As soon as we lost wireless connection, I immediately suspected the router, but without much evidence, Andrew and I worked (how, I don’t even remember) around it, and it wasn’t until his little brother, Russ, took a look at it over the weekend and made his grim diagnosis.

Anyway, post Apple-store-in-Soho-on-a-Sunday experience (New Yorkers, you can feel sorry for me), I stopped by a friend’s house and dropped off some food that I’ve been testing for a cookbook. We cannot possibly eat all this food ourselves (never mind the pounds of meat emerging from the kitchen), so it’s nice to have friends, hungry friends, who will gladly relieve you of extra food, so you can cook more food and try, Tetris-style to force it into your fridge. I then went to brunch at Marc Forgione with a bunch of family folk and everyone had a grand ol’ time and an even more grand meal. There were bloody marys, there was Sunday bacon, there were buckwheat pancakes, and pulled pork sliders.

Then, my adventures took me to Red Hook to Baked, where brother-in-law’s girlfriend and I picked up Russ’ belated birthday cake. Vanilla. With chocolate frosting. Completely covered in rainbow sprinkles. We came home and I started on dinner – we had Russ’ friend coming over.

And then — something happened. In a span of about ten minutes, I started to feel achy, like I wasn’t myself. You know that feeling, when you feel like you’re falling a touch behind the beat, when lifting your arm to grab a pan off the peg board is suddenly work, when you open your fridge and stare at butter and think to yourself, “Where is that stick of butter?” I proceeded with making dinner which may or may not have involved duck confit, and instead of my usual glass of wine, I went straight for bourbon. I had decided it was medicinal and it would cure me of all ills.

I woke up on Monday morning feeling as if my head had been stuffed with cotton balls. I was achy and congested and running a mild fever. Andrew went to work, and I defrosted some chicken broth, which was double chicken stock to be exact (stock made with stock), and that, along with some fizzy water, pretty much carried me through the day. I also had an apple and couldn’t taste it.

So after a few such days, I’m returning to the land of the living. You know the land when you get hungry and things taste good. The land that allows you to take more yoga and maybe even, in a few days, go for a short run. The land when you’re one simple desire is not to be left alone under a blanket with reruns of the West Wing (though I’m always up for reruns of the West Wing). It’s nice to be back. Hi.

And it’s right in time for the weekend. I’m contemplating trying this new thing I call “electronic Shabbat”. I heard about it from the kitchen while Andrew was listening to some video on it. It’s exactly what it sounds. From sunset Friday to sunset Saturday, you put your electronics away. Shut them off. Twenty-four blissful hours of no emails, tweets, Instagrams, texts, or calls. It sounds so amazing, I might just give it a go.

And of course, I’m excited to see two of my favorite people (and their better halves) for dinner tomorrow night.

Enjoy today’s links – there are many – but I’m very fond of all of them. Happy weekend, everyone.

Will SCOTUS help shut down government too? Jeffrey Toobin takes a closer look at one of the cases currently under review.

For those of you who didn’t stay on top of the government shutdown but wanted to get a top down view anyway. This is truly great. Thanks, New York Times!

Mark Bittman asks, “Should you be eating chicken?”

How many calories are you burning cooking? How about vacuuming?

I try to avoid hand sanitizer as much as possible. Nothing against it, but I’d rather wash my hands instead. Here’s an interesting piece on whether or not it’s toxic. What do you think?

Is music key to success?

This took my breath away and made my heart squeeze a bit. Russia, however, long ago I lived there, has a deep emotional hold on me; its rich and painful history; its people; it’s current (and past) political predicaments. Gorgeous, achingly lovely, and thoughtfully done. New York Times, thank you for this piece.

18 forgotten one-hit wonders of the 90s. Just want to say we played #18 at our wedding. Also, someone (and you know who you are) got Crush stuck in my head for a good few days ;).

Julia Child’s 100 favorite recipes. I kind of just want to dive in and make them all.

Alcohol as escape from perfection. A great, long, interesting read.

Lance Armstrong, the anti-hero. What the disgraced athlete has in common with Walter White and Don Draper.

The final insult in the Bush-Cheney marriage. Long, but so good.

The preservation of 16th century Hebrew text (and font).

Scientists are beginning to understand why humans need sleep. Fascinating.

The Tea Party wants to divorce the GOP. There’s an expression in Russian, one word in fact, “doigralis” that loosely translates to, “Well, look what all this misbehaving has led to…”