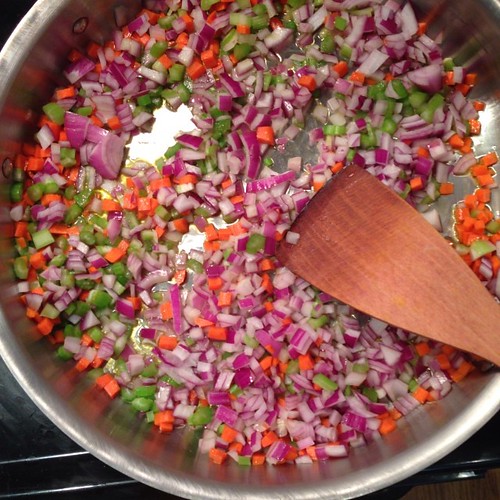 Last night while recipe testing, I had an unmitigated recipe fail on two of the recipes I was working on, which made me scrap the third one and just call it a night. Instead, we went out for burgers and hot dogs and beer. But I couldn’t help feeling frustrated – shouldn’t I have whipped up something quickly for dinner to make up for the fail? Cabbage with hot sauce and a fried egg? Roasted butternut squash with red onion (and tahini and za’atar)? And when all else fails, there’s always pasta, right?

But here we were, out in a first cold, drizzly October night on our way out to dinner. I left the kitchen as it was – planning to clean it up upon getting back.

While I can’t tell you exactly what I was testing, I can tell you that the first experiment was grainy instead of being perfectly smooth. And since it was the first time I’d ever tested anything like it, I had no foresight on what to anticipate or how to correct it.

About the second recipe, I’d like to share this nugget of wisdom with you: do not attempt, unless you’re an expert butcher, to debone a turkey drumstick. It’s not the same a chicken drumstick – it is much harder. Turkey drumstick, as I learned last night, is full of cartilage that runs up and down the length of the drumstick, all over the drumstick, making it pretty difficult to debone and wind up with meat that doesn’t look like it went through the shredder. I wish I could tell you I saved it for stock, but given the intense recipe testing taking place in this kitchen, the entire freezer is full of chicken stock, lobster stock, veal stock, extra meat scraps, frozen soups and sauces, and an occasional pint of ice cream. I felt pretty terrible wasting food.

In my next attempt, I will just ask my butcher to debone these drumsticks for me. Or, if they let me stand behind the counter with them, watch how to do it going forward.

As we sat in our booth last night eating our dinner, I said to Andrew that I couldn’t have felt like more of a failure in the kitchen that night, and that I should’ve been more resourceful and McGuyvered that dinner into submission. Eating at home, after all, is much cheaper than eating out, and this seemed like not the best use of our money.

Andrew looked at me, “You know we went out to dinner because I was working from home all day and felt cooped up? I needed to get outside – that’s why we’re here.”

My reasonable self tells me this is a wrong mentality to adapt – that we all need a break, that it’s okay to throw up your hands and say we’re eating dinner out. But my type-A self tells me otherwise. What would my grandmother have done in Russia, I think to myself, she wouldn’t have had the eating out option?

And chances are, with my grandmother, when all else failed in her expert culinary hands, she made us pancakes. There were always ingredients for pancakes.

Pancakes these were not, it’s nice to have options. It’s nice to eat something for dinner other than a hastily made peanut butter and jelly sandwich. And while it’s one my favorite things to eat, my type-A self would find that a sandwich made as a result of kitchen failures tastes a little bitter.

Maybe I should just tell my type-A self to pipe down and cut herself some slack.