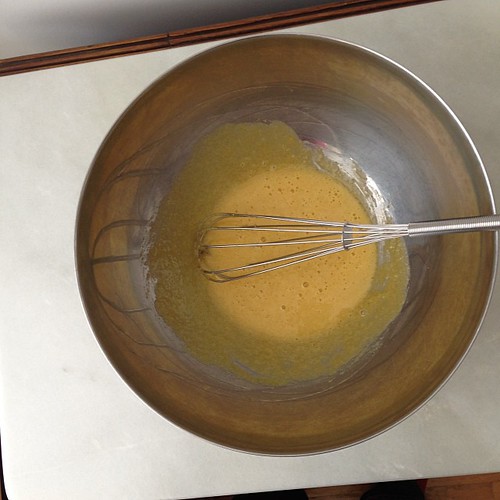 Happy Friday, friends! If I could sum up last week for you properly it would be the week of continuing colds (mine and Andrew’s) and the week of crème anglaise (oh, yes, and the Nobel prizes were handed out – more on that below). It started out, innocently enough, at Andrew Scrivani’s, where I spent my Sunday making fun things with eggs. Creme anglaise, souffle, some other stuff – lots and lots of eggs. And afterwards, I walked over to Union Square where Andrew and his team presented their idea for this year’s Storyhack. Andrew’s team was the only team to win more than one award – they won two: Most Likely to Shift Perspective Award and Audience Choice Award. Their idea, called Run for Us – is pretty empowering and hopeful – which the opposite of how many of us feel about our government these days.

But about that crème anglaise, for the rest of this week, there’s been crème anglaise recipe testing for the book, and then I decided to do some recipe testing for the blog, taking the custard in a slightly different direction, and long story short (and dozens of eggs later) — the fridge is now full of custard in various jars. I have so many plans for it – but that means I should also book some extra time on the treadmill.

I am told this weekend is a long weekend because of a holiday on Monday. Freelancing makes me forget about things like that, but still it’ll be nice to have an extra day when I can sleep in a little longer and focus exclusively on making book progress. My younger brother-in-law and his girlfriend are visiting, so we’re excited to host them. I wish you all a good and cozy long weekend – mid-October is my favorite.

P.S. Sassy Radish has undergone a slight facelift, namely cleaning up colors and fonts; tightening up and cleaning up the left handside and such. I hope you like it – it’s subtle, but I think it works better.

My Pope crush continues… this interview with an Italian journalist who happens to be atheist. A must read.

The daily routines of history’s most creative minds. I find a lot of this article making sense (and plan on reading the book), but my best, most productive time is 6am to noon. Then I need a break before doing something different work-wise, but writing, for me, is best as early as possible before the interruptions come.

Why Republicans don’t compromise — chalk it up to different wiring.

While the government is shutdown, a foodborne illness outbreak is taking place.

Yesterday, Alice Munro won the Nobel prize for literature. Here she is on being a short story writer, ” I was going to write a novel. And still! I still come up with ideas for novels. And I even start novels. But something happens to them. They break up.”

Finally, a smoke detector every cook will be grateful to have.

Grad students account for one third of the education debt. Wow.

An amazing, in-depth article on Jeff Bezos, a long and interesting read.

Study: we’ll enjoy the food more if we don’t Instagram it. In other words, let’s put our cameras down most of the time and just enjoy every bite.