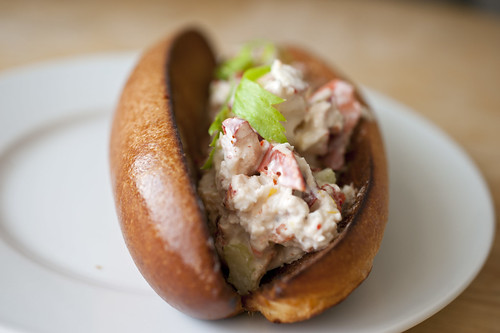 My darlings, you can take a girl out of New England, but you can’t take New England out of the girl. That I can say with the utmost certainty.

It’s been ten years since I called myself a Massachusetts resident. After college I planted my roots in New York, and stubbornly, because New York wasn’t always the gentle and welcoming city to me (is she to anyone?) made sure, day by day, month by month, that New York and I got along. I courted her, patiently growing to appreciate different neighborhoods, seeing the beauty where most tourists saw squalor, walking her streets. We had a slow and steady courtship, but I was playing it for keeps. New York, finally, opened her heart wide to me, and I to her. 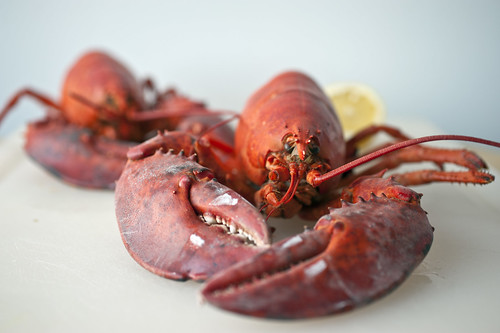 And yet, for the decade that I’ve lived here, New England tugs at my heart. I’ve maintained my Boston sports team loyalties. I prefer the Cape to the Hamptons or the Jersey shore, New England clam chowder to the Manhattan one, Maine blueberries over their New Jersey cousins. And then, of course, there are lobster rolls.

Lobsters, while can be purchased and eaten anywhere, are something special in New England, particularly in Maine, where the culture of lobster catching and eating reaches new heights. A lobster roll is something that is so ubiquitous to Maine you’d be hard-pressed to go there and not encounter them on practically every menu. Maine might as well rename itself as “Maine – Lobster Rolls Here” because they are abundant, delicious, affordable, and for reasons I’ve yet to figure out, taste better there than anywhere else. 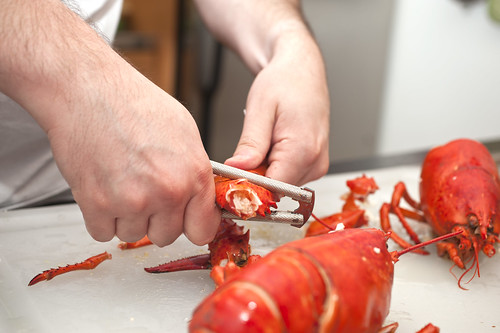 A Maine lobster roll is served in a warmed, buttered hot dog bun, but the lobster meat itself is cold, lightly cloaked in mayonnaise, with a few slivers of celery strewn in between. The texture of slightly toasted, crisped bread, melted butter, and soft, salty-sweet lobster meat is enough to send most into paroxysms of joy.

There is also the Connecticut-style lobster roll, served with warmed, generously buttered lobster meat, and while I am hardly someone to turn away butter on anything, it is the Maine lobster roll that I will order, make, and pledge unyielding devotion to. 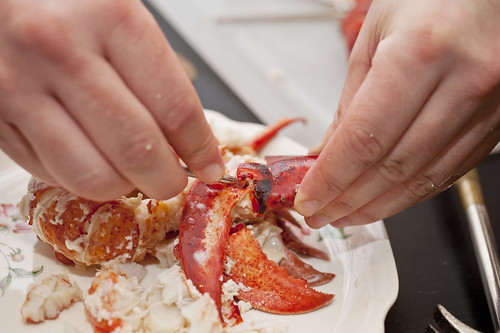 And while I’ve been making lobster rolls for awhile, it wasn’t until recently that I actually had to kill my own lobsters for the occasion. There I was, in a kitchen with boiling water and two very acrobatic lobsters who, I’m certain, were trying to karate chop me in their own way, fighting for their life. Finally, in a moment of decisive action, I lunged, grabbed one of the lobsters by its torso and shoved the poor crustacean, head first, into the pot. Its comrade quickly followed suit. The lid went on top and I sank to the floor, utterly traumatized by the process of taking a life with my own two (or in this case one) hands.

Some clanging and squeaking followed – and I was certain it was the poor lobsters screaming in agony for the lives. I held my head in my hands, certain that I will never eat a lobster again. Finally, the noises subsided and the kitchen was enveloped in a creepy silence. I didn’t hear “Lobster Killer” whispers in my head, but it felt pretty wretched all the same. 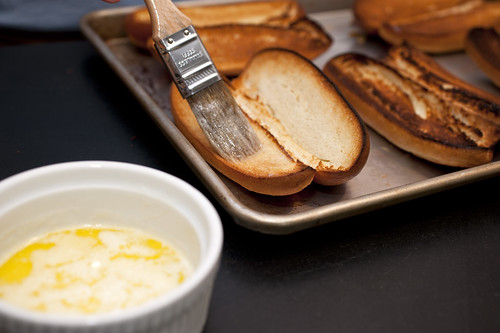 Later that day, while picking out the lobster meat from the shells, I learned from Melissa Clark that it is best, before you cook your lobsters, to freeze them for fifteen minutes. The cold puts them into a deep sleep, which makes them less acrobatic and martial arts-prone, and thus less aware of their upcoming demise. 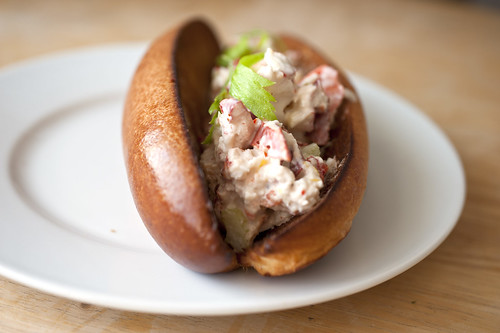 And a week later, while talking to some lovely folks at the Lobster Pound, I learned that the sounds I heard were not screams, but rather the air escaping the lobster shell. Good tips, considering that there is most certainly more future lobster-cooking projects in my future, given it’s summer and no summer is complete, at least in my book, without some lobster rolls – I just hope that future lobster cooking will be far less traumatic.

Killing lobsters, or any living thing for that matter, is no easy feat and isn’t for the faint of heart. It’s hard to take a life and it does make you respect what’s on your place a lot more. Over at Gilt Taste, Melissa Clark gives you a good primer on what might be the best way to do the dirty deed (hers is well researched!). As I mention above, I also spoke about the trauma of killing a lobster with some lovely people at the Red Hook Lobster Pound, who suggested I freeze the beast 15 minutes prior to cooking. They also gave me one great morsel of information – those sounds you hear coming from the pot? That’s not lobster “screeching” per se, that’s air escaping the shell. Sort of made me feel more at ease with what I’m doing. Taking a life is not easy, I do it with a heavy heart. But you develop a newfound respect for those folks who get our meat to our tables, particularly those who opt for a small-scale, most humane approach. And lastly, a lovely lady by the name of Jacqueliene Church sent me this awesome link about 1- things you didn’t know about lobsters and the nerd that I am wanted to share them with you as well.

1. Cook the lobsters. Freeze them for 15 minutes before cooking, and then stick them in a large pot with a few inches of boiling water and a steamer. Steam for 15 to 20 minutes, until the lobster shell and flesh turn red and the tomalley – green. Allow the lobsters to cool.

2. Remove the lobster meat from shells and dice into bite-sized chunks. You should have about 2 to 2 1/2 cups of lobster meat. Finely chop the celery stalks, saving the leaves for garnish. Add 1/4 cup of the chopped celery stalks to a bowl with the lobster and fold in the mayo. Season with more salt and lemon, if needed.

3. Preheat the broiler. Place the hot dog rolls on a baking sheet; toast, split side-up, until golden, about 1 minute (be attentive so they do not burn). Brush cut sides with melted butter.

4. To serve, divide lobster mixture among rolls. Top with scallions and celery leaves; drizzle with butter. Add a pinch of paprika and another drizzle of lemon juice, if desired.