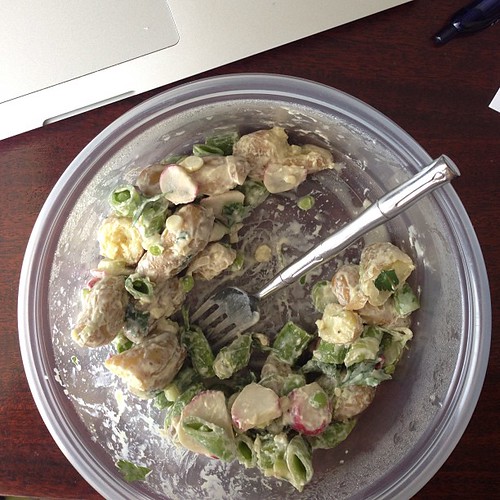 Yesterday, in a 5-4 landmark ruling, the Supreme Court struck down the 1996 Defense of Marriage Act and effectively allowed marriage equality in the state of California.

I really can’t put much together that’s coherent a propos this salad (which is seriously good, and I’m going to add more to the headnote). I’m too elated, gratified, and excited by the historic ruling. Equal treatment, rights, and protection under law regardless of skin color, gender, religion, or sexual preference. I’m moved and am very happy for my friends in same-sex relationships and marriages – this is progress for everyone – for society at large. We became a little better as a nation yesterday.

In fact, we, coincidentally, had a version of this salad for dinner last night. We made lobster rolls the night before, and nothing goes better with lobster rolls than a summery potato salad. I’m not talking about a heavy, mayo-laden traditional salad here, though I love it just as much (Russian – meet potato). This time of year, I prefer more of a salad that uses potato as a vehicle for a punchy dressing (and texture) but has more crunch and lightness than heft. Potato isn’t really the star of the show — the spring and summer vegetables are.

I took the picture above last week while I was eating this salad at my desk for lunch. I was a little pressed for time, so my phone proved sufficient with its camera. The salad came together organically: I was rescuing vegetables I had forgotten about, after getting overwhelmed with the sheer amount of work on my plate and the private chef job I took on (and finished last Sunday). Thankfully, things like sugar snap peas and breakfast radishes stay crisp for awhile, so the rescue was a success. I posted a picture on Instagram just for the fun of it, and a few of you wrote and tweeted me asking for a recipe. Archives suggest that I like to write about potato salad both mostly in the summer months (perhaps because what is a picnic without a potato salad?). I’ve posted about it here and here. But this salad – it’s my favorite version yet. 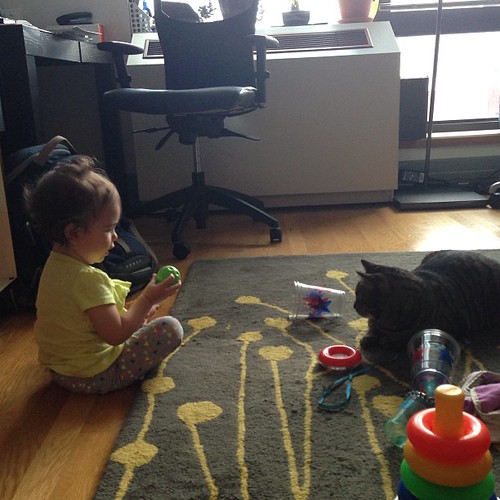 Totally unrelated, can I tell you something about last Sunday (my last day private cheffing) that has nothing to do with marriage equality (well, actually a little)* or this salad? After a day on my feet, and the grocery drop-off, I rushed home to help my husband babysit our one-year old niece, Maya, whose parents, who live in DC, went to a wedding that night. I was, honestly, petrified. Babies, still, frighten me a little bit. I don’t have so much experience that I would just know what needs to be done. But I figured, hey, centuries of people before us… and all that jazz. And so we played with her, we took her for a walk, we got her to nap, we changed her diapers and clothes, and we made her dinner. Maya ate with great aplomb: bits of mango and blueberry; homemade mac and cheese and cucumber; her favorite though — apricot sriracha chicken which she greedily shoved in her mouth. I don’t know if this is typical of babies, but Maya prefers to feed herself, and doesn’t show much enthusiasm for food you feed to her. Also, I think Maya stipulates in her baby contract that she’ll eat only if she can feed a third of it to you! The other third, she’ll contemplate, smush in her hand, and in a graceful, ballet-like move, where her arm draws an arc in the air, drop it on the floor. It’s the remaining third that wound up to be her dinner – and Andrew and I considered it a success. 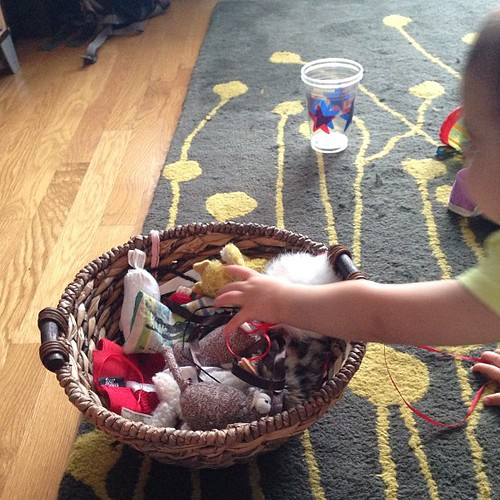 My favorite moment or moments, rather, were of Maya and Forrest together. Both curious about one another, they regarded the other with a modicum of suspicion. I think that Maya found Forrest to be an odd, hairy baby; while Forrest couldn’t quite figure out what this new, bald cat was doing in the apartment. And so there was a lot of careful extending of the hand and a lot of careful sniffing, and also, not surprisingly a lot of toy sharing. One year old’s toys that make noise and can be shaken and rolled around — cats love ‘em! And little cat toys often light up, make noise, are small and portable – easily confused with baby toys. Writing it just now doesn’t make it sound as funny as it was at the time – but trust me, it was cute and amusing. And so the question of cats and babies and Forrest’s possible adjustment to a hypothetically possible baby sometime in future – there’s promise, friends — promise indeed!

But man, a one-year old eating apricot-sriracha chicken and liking it? That’s wild.

*Maya’s parents’ wedding anniversary is now linked to the day SCOTUS struck down DOMA. And now the day is doubly special: one because two wonderful people who love one another got married; and two because after yesterday, this paves way for everyone else to be able to do the same, regardless of whether or not they love someone of the same gender or the opposite one. As my friend, Shauna, said yesterday: Love won. It did, indeed.

My rule of thumb with this salad is lots of crunchy things. I’ve also called it “Potato Salad With Lots of Spring Vegetables” – because that May-June period is kind of a transition. But the basic premise is simple: You want it to taste fresh, fresh, fresh! I suggest not waiting until the potatoes are room temperature to make it; you want the potatoes to be still warm-to-hot when you toss them with the dressing – that way they will absorb the dressing better and potato salad will taste more luxurious. Don’t have sugar snap peas? Just throw some cucumbers in there. Spring onions not in season? Use summer onions or scallions! The dressing is something I threw together last summer and liked it so much, it’s been my go-to potato salad dressing. It’s just yogurt, olive oil, and Dijon mustard stirred together.

1. Cover potatoes with water in a medium pot and season well with salt. Bring to a boil, then simmer until tender, 10 to 15 minutes.

2. While the potatoes cook, with a fork, whisk together the yogurt, olive oil, and mustard until they form a slurry. Season to taste with salt and pepper and set aside.

3. Drain potatoes and let cool for 10 minutes. Transfer the potatoes to a large bowl and, using a wooden spoon, press on the potatoes until they break. If some of the potatoes are too big, break them apart with the spoon. Add the remaining salad ingredients, along with the dressing and toss to coat. Taste and adjust seasonings if needed. Serve either slightly warm or at room temperature.