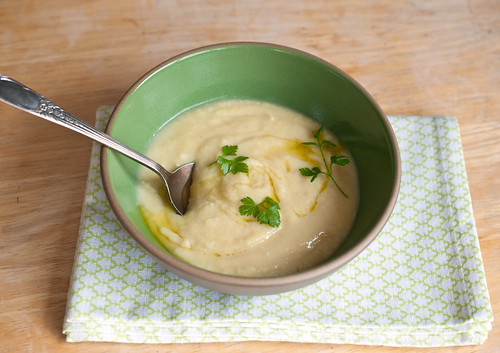 Let’s not beat around the bush. Everywhere you look these first few weeks of January, you’re going to see a lot of soup. Because, it’s the New Year – which means a new leaf, new resolutions, new plans. I guess that also means soup? I’m not complaining; soup is one of my favorite things to eat. Let there be soup, I say!

I, for one, don’t have any resolutions this year. Not one. There’s plenty already to keep me busy and I want to focus on things already in motion: a wedding this summer, a book in the making, and something else I can hopefully tell you soon about (and no, it’s not a baby). But it’s very, very good, I promise.

I was reading Shauna’s post last week and along many great things that I’m still mulling over, she wrote, I don’t want to become a new person. I just want to be here.

There’s nothing much more that can be said about what Shauna wrote other than yes. She put so much in just two sentences. I wrote them out on a piece of paper and stuck them in a box that sits on my desk. I want to read these sentences whenever I forget what’s important. 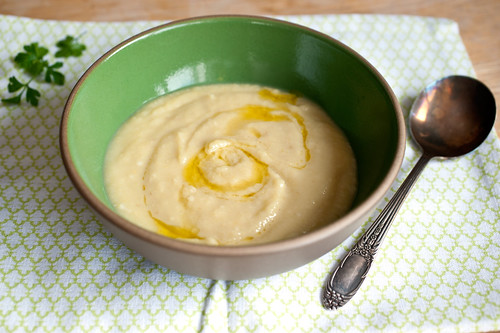 Anyway, the soup. Lest you think that I am all resolutions and eating healthy, I want to say that first of all, we don’t eat “healthy” around here. We eat what we like, which happens to be whole grains, fruits and vegetables, and an infrequent animal protein here and there. It might be health food to some people, but to us it’s just food. Food we like and food that tastes good. If you think I’m being coy, go and look inside my fridge, and you will find three types of butter amounting to roughly six pounds.

The soup here, however virtuous it appears, is a bit of a misnomer. With the generous heap of parmesan that I unceremoniously shoved in there, it’s not exactly holding back. I wanted the soup to be a bit more substantial than just pureed vegetables.

We got a bag of tiny parsnips from our local farmer. I couldn’t resist them – they looked like tiny white carrots and the farmer was selling them next to nothing. I had read somewhere that early parsnips are sweeter than their later-in-season cousins; I don’t actually know if that’s true, but these turned out to be sweeter than what I’ve had before. 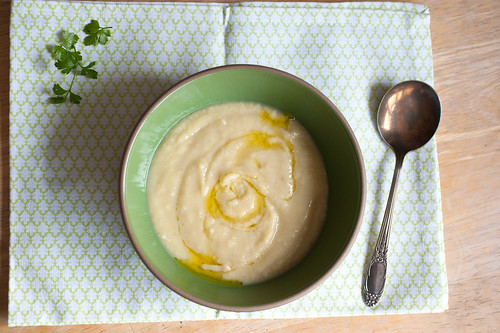 Immediately, I wanted soup. Not because it’s winter or because it’s the New Year (and seemingly everyone has written about soup), but because I was feeling a cold coming on and I wanted something warm and comforting. As I write this today, I am in my finest loungewear, nose aglow, tissues at one side, hot tea at another, decongestants all around me. If you saw me this very moment, you’d think I’ve completely degenerated into one of those people who works from home and stays in their bathrobe all day long. Which is totally not true. Come noon, I just might put some yoga pants on and brush my hair. Maybe.

It also merits to say that I make a terrible patient. All that lying on the couch, napping, or watching television, can only go so far for me. At the end of the day, poor Andrew has to sit there and listen to all the things that could’ve been done and weren’t. Still, despite my complaining, he’s been an excellent nurse, plying me with tea and blankets at my slightest behest. Let’s just say I owe him. Perhaps I can pay him back in soup.

As for those tiny, cute parsnips, I really wanted to pair them with leeks that were languishing in my crisper, and make an all vegetable soup. I didn’t want to use chicken stock because I wanted the taste to be pure, clean vegetables, so I used water. Halfway through I tasted the soup – the sweetness surprised me. Even after a generous helping of parmesan, salt, and lemon juice the soup had an unexpected earthy sweetness. And with a drizzle of our best olive oil, and a hunk of crusty bread, it made for a fine, simple dinner. I threw in a kale salad to make the meal more substantial, but otherwise, we ate simply, humbly, but so well.

I’ve some of that soup left over for today and I think it’ll make a spectacular lunch. Quickly reheated, with a drizzle of oil and some toasted bread, I think that it’ll serve me just fine. Perhaps, maybe, I’ll even shower and throw on some real clothes for good measure. That’ll make things a bit more civilized, don’t you think?

I have to say, I’m tempted to add even more cheese here than just 1/4 cup. It all depends on how much of that umami taste you like. If you feel like you need more of that background flavor, try adding 1/3 cup of cheese. And if you want to make the soup completely vegan, just omit the cheese, but know that the flavors will change and the soup will be much sweeter.

1. In a large stockpot, or Dutch oven set over medium heat, warm 2 tablespoons olive oil and cook the leeks for 5 to 8 minutes, until soft and translucent. Don’t let the leeks brown. Add garlic and cook for 1 minute.
2. Add the remaining olive oil and parsnips, stir for 1 minute. Add with 4 cups of water, stir in salt and pepper, and bring the soup to a simmer. Cover the pot, reduce heat to the lowest setting, and simmer for 30 minutes, until the parsnips are fork-tender. Stir in Parmigiano-Reggiano, lemon juice, and zest. Taste and adjust seasonings. Using your immersion blender or after ladling the soup (maybe in two batches) into a regular blender, puree the soup until smooth. Ladle into bowls. Serve with a drizzle of extra-virgin olive oil and some chopped parsley.