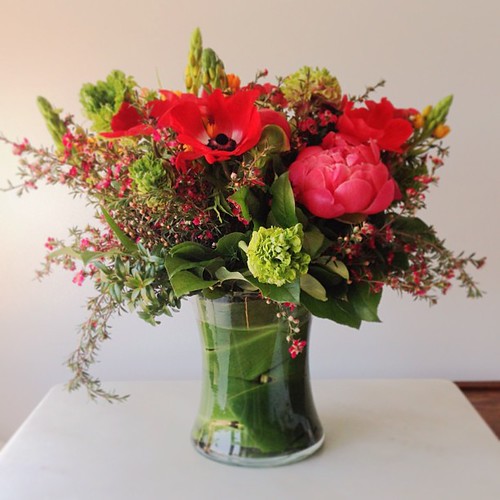 Happy Friday, friends! Quite an eventful week as I turned 35 on Wednesday, got more flowers that day than ever in my life, including that stunner of an arrangement above (that one’s from my husband who really outdid himself). The night before, we went out to dinner at Blue Hill (in the city) and ordered the tasting menu but we called it “untethered” or “free range”, as in we let the kitchen prepare whatever and with every arriving dish, it felt like a wonderful surprise. The day of my actual birthday was a huge success outside of me accidentally stabbing my hand with an oyster knife while trying to pry open a particularly stubborn Bluepoint. There was quite a bit of blood, but Andrew valiantly bandaged me up. Prognosis: I’ll live.

There were, also, some fabulous links this week, and I was able to collect some of them. I hope you like them, and I hope you’re all looking forward to the weekend.

Mesmerizing. What broccoli and other fruit and vegetables look like when put through an MRI scanner.

What happens when you’re a chemistry professor and you have a three-year old that won’t stop asking why. Fantastic.

In mixed drinks, diet soda might get you drunker than regular soda.

Is Michael Pollan a sexist pig? A terrific piece on cooking, gender, and much more. While I’m a huge fan of Pollan and his work, the author of these pieces makes some valid points about women and cooking, and I’m glad she addressed them. In general, I have a bone to pick with the notion that everyone has to cook and love to cook, and while I am firmly in the “Yay, cooking!” camp, I don’t think everyone should be cooking or is able to. Different time demands and constraints, not to mention interests, can make us more or less interested in cooking. And it would be great to have healthy home-cooked meals easily available (and affordable) for the moms who commute two hours each way to work, or dads who have a home business that, instead of shortening their work days, stretches them beyond twelve hours. Not everyone can come to work at nine and leave at five. Whether or not they should is a different argument all together, but such is life. And what about trying to exercise? For some people it’s a choice between going for a run and spending that time cooking dinner. Why is one more important than the other? Furthermore, lack of cooking in our parents’ generation shouldn’t be blamed on moms alone – where are dads in all this? In reality, not everyone has time to cook, and on top of prepping, chopping, and cooking, what I think, gets most people, is the process of post-dinner clean-up, which should, in all fairness, be tacked on to the “cooking time” of the dish. I can tell you in all honesty that half the reason we order take-out in this house is because we cannot spare the time (or sometimes the energy) to clean up after, or we are too damn tired. In any case, thanks, Deb, for pointing this piece out. And here are two more pieces by the same author. I can’t wait for her book to come out.

Amy Poehler on Fallon – how about those Germans? Does anyone NOT want to have a drink with her?

Why you should buy antibiotic-free food by the always-excellent Barry Estabrook.

The rise of genetically modified crops in 2 charts.

A devastating article on the fall of Robert Diamond, former CEO of Barclays, after the LIBOR scandal. This quote just floored me: “Do you want the truth?” he said. “Up until all of this, I didn’t even know the mechanics of how Libor was set. If you asked me who at Barclays submitted the rate every day, I wouldn’t be able to tell you. I bet you if you asked any chief executive of any bank on the street, they would give you the same answer.”

How I became a hipster. A must-read. “I now know how to sharpen a knife, hold a knife, and crosshatch an onion. I know now that, if the economy sours further, I can trade in all my books for herbal diuretics. I know that I’m not an enthusiast of fixed-gear bikes, but that having my midsection squeezed by a tightfitting vest energizes and propels me in the manner of a watermelon seed pinched by two fingers.”

Wishing you all a very lovely weekend ahead. It’s Cinco de Mayo on Sunday! Might I suggest a few drinks for celebrating?