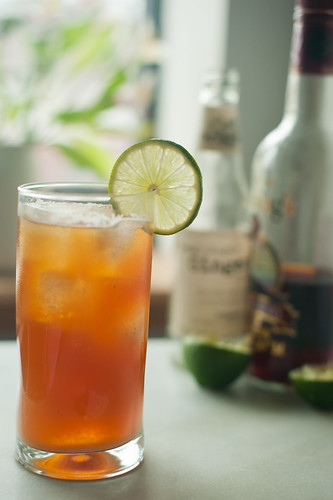 I had my first Dark and Stormy when I was on my first (and only) vacation in Mustique with my then-boyfriend’s father’s family. It’s a gorgeous, lush island in the Caribbean, close to St. Vincent island, and it’s the kind of place where, unless you own a house there, you must rent one for an astronomical price. The house comes with staff who will wait on you, cook for you, tend to your every need. All you have to do is buy groceries and fly them over there. No big deal, right? Not if you like to live “like a [fill in the blank] raja” — my ex’s father’s words, not mine. At the time, I found the phrase to be funny, and he (the father) was always lovely to me.

Anyway, Mustique was kind of a surreal place, and our rental house, one of the swankiest on the island, opened to a kind of a panoramic view where you see so much of where water meets the sky that you see the horizon beginning to curve on the ends. It’s a simple thing, but it’s the kind of thing that never fails to take my breath away. That curve, that hazy glow of water meeting sky, when I think about it even now, I get a little light-headed. It was truly, breathtakingly gorgeous there. It was also the island where I got to stand, one foot away, from Mick Jagger while we waited out a quick shower on the beach.

I had ducked under a hut to wait out the rain and while I was lost in my thoughts, a man came in. I didn’t much pay attention at first, thinking it was my then-boyfriend, but I immediately realized the man was much, much taller. I looked and then I saw: the man sharing the hut with me was none other than Mick Jagger.

“Blimey weather we’re having,” he said to me.

“Hmmm,” was all I could squeeze out of me while trying my best to look nonchalant. In my head, I kept saying to myself, “Be cool. Act cool. Just act natural. It’s only Mick Jagger. No big deal.” And then my inner voice would betray me, “ITSMICKJAGGERITSABIGFUCKINGDEAL!!!” And then again, “Calm. Down. Just. Act. Natural. Be. Cool.”

For the next ten minutes, Mick and I (see how easily that rolls off my tongue?), chatted about the weather service he used that’s up in Norway, and apparently, they totally failed to tell him of the impending shower, hence the “blimey weather” comment. I nodded, said it’s really no better in the States, and generally acted as if I had absolutely no idea who he was. “The man is on vacation, Olga,” I said to myself, “the last thing he needs is to deal with a fan.”

So we finished our chat, and he went on his way. And I wound up re-joining my group who was all mouths wide open that I just hung out with the Mick Jagger.

That’s the kind of stuff that happens in Mustique, and hey, it’s no big deal, apparently. 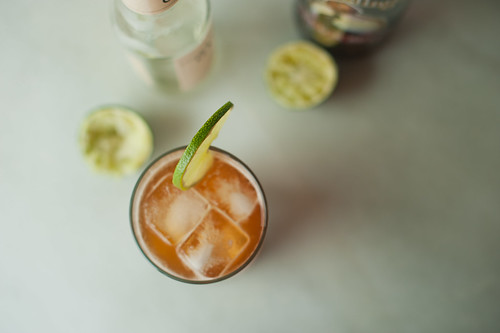 The other thing that happens in Mustique regularly, is that just about everyone goes to this place called Basil’s Bar. It’s also a restaurant, but we mostly just went to get drinks there and watch the sunset. One night, I met some baroness from Switzerland – she knew some very fancy people, and all I tried to do is downplay my pedestrian roots. She never asked me what I did for a living, and assumed I was a lady of leisure, as she advised me on superior places in New York for lunch. I didn’t have the heart to tell her that lunch was usually a salad, eaten surreptitiously at my desk, like a scared, rushed rabbit with a piece of lettuce stuck between its teeth. Still, she was a lovely, funny lady with a deep interest in opera, so we had a lot to talk about for a good long time.

Basil’s is the kind of place that everyone goes to, and everyone loves, and Basil knows everyone and everyone knows Basil. Sometimes you order one drink and you get two instead. Sometimes, a little tray of food arrives. Sometimes, they’ll roast a sucklig pig on on a spit, and that’s what everyone has for dinner. Most of the time, you leave the bar a little happier than before and a little tipsier. I don’t remember paying for drinks there, but I’m pretty sure, given its international crowd, all currency is accepted.

And Basil’s is the place where I had my first Dark and Stormy, watching the sun set over the Caribbean sky. To this day, Basil’s Dark and Stormys are the best I’ve ever had; I have a feeling the location had something to do with it. I asked Basil for the recipe and it was equal parts of black rum and equal part of homemade ginger beer served in a tall glass filled with ice. The key, Basil said, is to make your own ginger beer, as it’ll make all the difference. To put his money where his mouth was, Basil even gave me his ginger beer recipe and I have it written down somewhere, I swear.

I have yet to make my own ginger beer, but we have a pretty decent stand-in in New York as Bruce Cost’s ginger beer tastes exactly like homemade ginger beer (probably because all the ingredients are things you can find in your pantry). And so as the weather get better, and I crave fewer and fewer whisky drinks, this is going to be a cocktail you’ll most often find in my drink, besides, maybe a Pimm’s cup and a negroni.

Basil’s Dark and Stormy came with a small lime wedge, which I’d squeeze into my drink, unaware that doing so deviated from the traditional Bermuda cocktail, but as I learned, while researching this drink, from the wise David Wondrich, in the US we like to add fresh lime juice to the D & S, and that’s how it’s served more often than not. I always thought a little lime brought out the flavors better, and apparently, so does Wondrich, and he’s a man who knows his drink. And who am I to argue with him?

Wondrich instructs in his recipe, that depending on the rum you use and the ginger beer you use, the proportions might vary – the trick is to get a good balance. Use the recipe as a guideline and take it from there. I’d also add avoid going crazy on lime juice – you want your drink to taste like a drink and not like spiked, muddled limeade with a ginger kick. The drink needs to be full of spices and flavors, but also clean on the palate. If you find it a bit cloying, you’ve added too much of probably ginger beer or lime juice. If you find the drink too strong, well, you know what happened there. But you can always water it down, if you wish.

Combine rum, ginger beer, and lime juice in a tall (preferably Collins) glass filled with ice cubes. Stir and serve. The key here is to nail the perfect proportion of rum to ginger beer. This, of course, will vary from rum to rum and from ginger beer to ginger beer. If you order this in Bermuda or anywhere in the Caribbean, you’ll most likely get it without the lime juice, however, in the US, lime juice is a regular actor in a Dark and Stormy, and frankly I prefer it this way (and so does Dave Wondrich, who knows everything there is to know about cocktails).