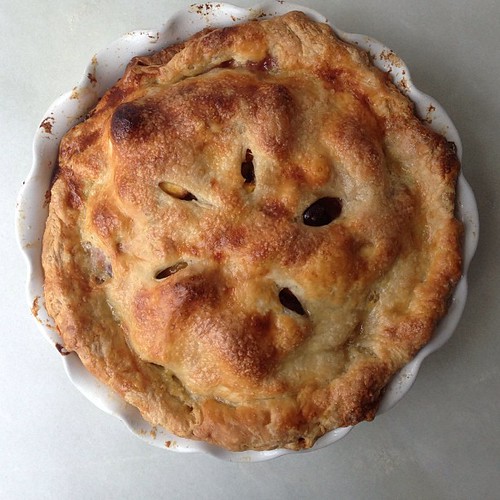 Happy long-ish weekend, friends! Hope you had a wonderful 4th of July celebration! We made that pie above – and it was delicious, albeit slightly misshapen. I was rushing and didn’t chill the bottom pie crust before blind baking it. The resulting bottom crust shrank a little, despite my pennies-used-as-pie-weights trick (copper! great conductor of heat!), but it all worked out well – the pie, full of peaches, cherries, and a handful of blueberries (I was on a rescue your fruit streak), were delicious. Our friends came over for an impromptu dinner of sloppy baos and a Vietnamese noodle salad (I’m still working on a version I’m completely happy with) – and the whole dinner felt like one amazing melting pot: Russians (and an American – my husband), eating Vietnamese versions of sloppy joes, with vermicelli salad, drinking beer and dark and stormys, followed by a very American pie. And despite, or perhaps precisely because, our meal was this hodgepodge of culinary traditions intersecting at our dinner table, the meal felt as American as it could: every culture, every one — is welcome.

But the best thing that took place this week is this past Wednesday, when around 4pm, I sent a revised manuscript to my editor! You could’ve tipped me over with a feather: all 500+ pages were out of my hands for at least four weeks!!

To commemorate this momentous event, and also, because no way was I going to make dinner after those several weeks, we went to one of our local restaurants that does happy hour oysters and beer, where we sat at the bar. And about five minutes into our celebratory eating (and drinking), who walked into the restaurant, but Michael Cera and sat RIGHT NEXT to us at the bar. He also ordered some beer and oysters (though his beer selection, comically, took a few tries) while reading Moby Dick and checking his phone (flip phone by the way!). So that was our, exciting, brush with fame that night.

As a nervous, preliminary heads-up, I don’t know if next week’s Friday links will happen. I’ll try my very best to make it so, but depending on what geniuses at Apple tell me, I might have to get my hard drive replaced – my computer has been acting up, and I can’t afford to have it fail on me mid-project. We’ll see what they tell us today. I’ve no idea how long this kind of thing could take.

I hope, in the meantime, you are all somewhere super relaxing, grilling corn on the cob, making lobster rolls, and sipping a nice, cold beer. Happy long weekend!

How to take care of your smart phone battery. You might be doing it wrong.

The link between work-life balance and income equality. Finally a piece that hits on all the points I’ve been thinking (but unable to articulate), like issues with the idea of “leaning in” and that Slaughter article that everyone kept emailing to one another. So many passages, I wanted to quote, so many! But I’ll leave it at just one. I wish that Marshe also addressed two-parent same-sex households as well, but as he is writing, mostly, from personal experience, he looks at straight couples only.

The success of Lean In can be attributed, at least in part, to its comforting espousal of an obviously false hope: that hard work and talent alone can now take you to the top. This is pure balderdash, for women and men. Class structures have seized to the point where Denmark has more social mobility than the United States. The last myth to die in America will be the myth of pluck; Lean In is the most recent testament to its power.

An idiot’s guide to the Reddit thread, “What’s the Most Intellectual Joke You Know?” My favorite joke there: “It’s hard to explain puns to kleptomaniacs because they always take things literally.”

Why animal feed is going gourmet.

If you think dismantling of the VRA only affects minorities living in below the Mason-Dixon line, think again.

Poverty maps in 1980 look astonishingly different than in 2010.

Remember the #bookswithonelettermissing trending on Twitter. Here are some photoshopped titles of the best ones. Enjoy.