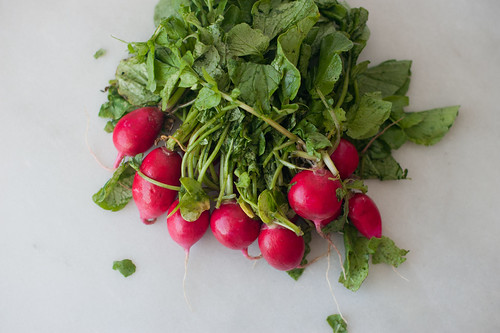 Hi, friends. Today, let’s talk to one another, frankly, about money. Or rather how we worry about money in this economy; and let’s face it — most of us, in some way or another, have worried about money at some point especially since 2008. Am I right?

But it would be unfair to write about food, eating well, shopping at farmers’ markets, seeking out the best ingredients, and not, implicitly, bring up money. No one’s going to give you a dozen eggs for free, never mind a dozen eggs from fancy hens with their own names. Ramps and fiddlehead ferns (the trendy darlings of spring) aren’t cheap. Go to the farmer’s market in mid-August and try to buy a few tomatoes – they’ll cost you. 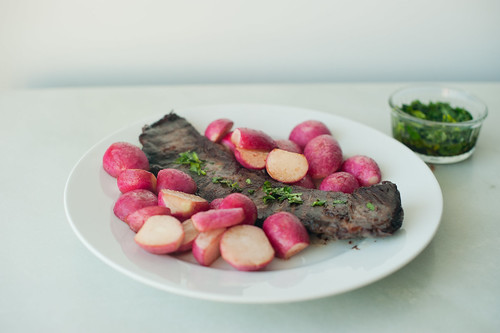 And I’m not saying they are unfairly priced, nor am I suggesting that we shouldn’t spend more money on food, but everyone has a different budget depending on cost of living, outstanding loans (student loans, anyone?), and various personal details. And while something might be fairly priced (a hand-stitched Birkin bag, for example), it doesn’t make any more affordable to someone like me.

For the moment, Andrew and I, while carefully watching our spending, shop our greenmarkets and local grocery stores, but we don’t have a set, hard budget for food. We try to be economical, try to fit in within certain price parameters, splurge on a few oysters from time to time, and treat ourselves to an occasional special bottle of wine. But we’re not trying to eat on a hard budget of x dollars a day, and we are very lucky that way. When we purchase our meat it’s either pasture-raised, organic, and always, always hormone-free. We’ve decided a long time ago, that we’d rather eat quality ingredients, than have more spending money on entertainment. But we are lucky to have the option of having a choice to do that. Many people don’t have that choice, and the challenge of providing a delicious, good-for-you, budget-conscious meal is a challenge especially when processed food, comparatively, might seem like such a bargain. And it’s a particular challenge if you’re thinking hormone/pesticide free, organic, local, and so on.

You can see how it’s easy to get preachy and seemingly judgemental about eating well.

My friend Caroline Wright, a wonderful food writer, who once lived in Brooklyn, and now calls Dallas home, wrote a book that’s as practical and thrifty as it is delicious, and appropriately titled it “Twenty Dollar, Twenty Minute Meals”. The recipes, intended for four people, are bright, delicious, and best of all – fast. Not only will your stomach thank you, but your wallet will too. And you’ll be able to cook and eat dinner in no time, which is of huge help especially on busy weeknights. 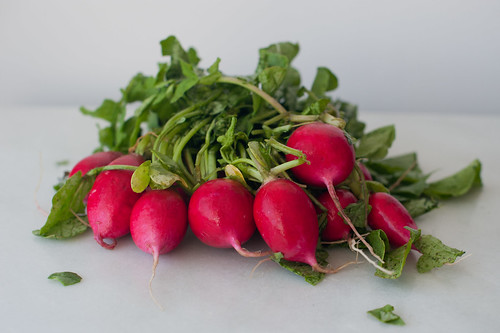 I decided to make Caroline’s steak with buttered radishes, and while I was hoping to get radishes from my farmers’ market, since they’d be tastier, I realized that I was slightly pressed for time, and raided the crisper where we had a handful of radishes sitting around. Since thriftiness also means wasting less, I figured Caroline would approve of my decision. I used skirt steak because I had it on hand, so I had to adjust for the cooking time (slightly less than a London broil). Twenty minutes later, Andrew and I sat down to dinner of lovely steak, buttered radishes, and a brightly acidic herb sauce! I made a simple salad to go with our steak and radishes: a peppery arugula dressed with lemon zest, a few drops of lemon juice, and olive oil. I couldn’t resist doing some quick math in the back of my head, and I was a little over half of the twenty dollar budget (given that we were only two people and that I added a salad to our dinner).

And with a glass of wine, the whole meal, while simple, felt celebratory, which is to say that weeknight meals should be exactly that – festive and rewarding for a hard day’s work.

GIVEAWAY RULES:
I’m doing a giveaway of a copy of Caroline’s “Twenty Dollar, Twenty Minute Meals”. All you have to do is leave a comment answering the following questoin: What is your knock-their-socks off meal that’s as inexpensive to put together as it delicious? Be sure to provide your email address (only I can see it), so I can contact you in case you win. Comments up until 11:59pm on May 12, will be considered for the giveaway. I’ll pick the winner at random, and get in touch with him or her about the prize, which Workman Publishing will ship to the winner. Good luck to you all, and I’m very curious about your budget-friendly stunner of a dish.

In the recipe, I instruct you to stir the vinegar in last. If you’re wondering why, it’s because vinegar makes greens go drab, color wise, the second you add it in. If you’re making this for a crowd (no doubt, your steak / amounts will be bigger), and even if you’re making this just for you and another person, it’s still lovely to have bright, verdant herbs next to the steak and radishes, instead of the dark brownish-green ones. Caroline’s original recipe is for 4 people, but I cut everything in half to make it for 2. I also changed the type of meat, swapping out london broil for a skirt steak (I’m not sure which cut is less expensive, but they’re both decent bargains).

2. Let the steak come to room temperature. Thoroughly pat steak dry and generously season with salt and pepper. Heat 1 tablespoon of oil in a large, heavy, ovenproof skillet set over medium high heat, until almost smoking. Add the steak and brown on both sides, 2 to 3 minutes per side, depending on thickness of steak. Transfer the skillet to the oven and roast until the steak reaches the desired doneness, about 3 minutes for medium-rare. Let the meat rest on a cutting board 10 minutes before carving.

3. While the steak rests, in a small bowl, combine fresh herbs, remaining olive oil, and garlic. Season to taste with salt and pepper and set aside.

4. In a medium skillet set over medium-high heat, warm the butter until foaming, add the radishes and cook, stirring from time to time, until lightly browned and crisp-tender, about 4 to 6 minutes. Season with salt and remove to a platter.

5. Slice the steak and arrange it next to the radishes. Stir in the vinegar into the chopped herb mixture, and serve immediately alongside steak.