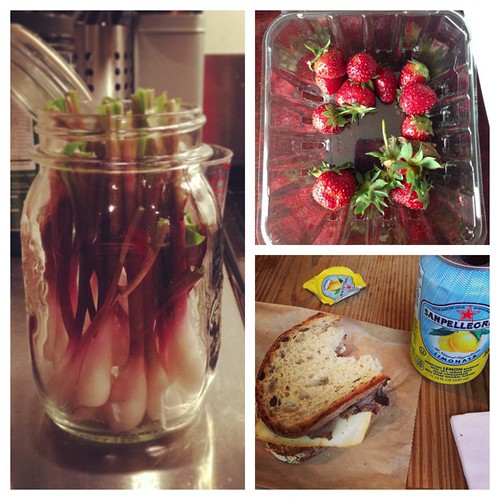 Happy Friday, folks. This weekend couldn’t come soon enough. Too much transpired over the last seven day – too much!

Last weekend I found out that my former boss and good friend (a young woman) was given a grave diagnosis of ovarian cancer. She was to have surgery on Monday and to start aggressive chemotherapy right away for six months. For the rest of the weekend, I was in a fog. I couldn’t make sense of it: she was so young – and the cancer was, supposedly, incredibly aggressive. She wasn’t even in the age group where this is a threat. This was someone I knew very well, worked closely with for four years, and remained friends with long after our company let most people go. She and her husband came to our wedding. I’ve babysat her dogs, played with her baby daughter, sat on her living room rug while we’d catch up on life. Like most cancer cases, nothing made sense. Black was white; white was black – the world flipped over onto itself. I was so angry this happened.

That same day, after we decided to walk home from Tribeca to Brooklyn Heights, we saw the would-be Brooklyn Bridge jumper, who, thankfully, didn’t jump in the end. But to be on the bridge surrounded by so many onlookers, seeing his tiny silhouette and the police on top of the bridge, talking, pleading – was chilling. The sound of the helicopters cutting through the air; the FBI agent who bumped into us, armed and grave. And the irony of timing: one of those perfect, crisp spring days with bright blue skies and not a cloud up above, and there was this charge in the air, like something bad was going to happen. We left before the police talked the man down. If he was going to jump, we didn’t want to see it. We took the subway home that day.

On Monday afternoon, while picking up some fruit at a nearby store, I saw a woman, a nanny, get hit by a car, while trying to cross a confusing intersection. In a millisecond, she opted to push the stroller out of the way so that the baby didn’t get hurt. But she got hit and was taken away in an ambulance after the little girl’s mother arrived.

That same night, I learned that my friend who had surgery, was cancer free and wouldn’t need chemo. When the surgeons went in, they discovered a very rare case of a benign tumor which they removed. And when her husband called me to tell the good news, “Are you sitting down?” he said before he told me. I thought to myself, “Something awful. I must sit down,” And I did. But instead of something awful, the news turned out to be amazing – a miracle. I was out to dinner with some girlfriends at the time in one of those Manhattan restaurants where everyone is way cooler than you. Standing in the middle of a busy room, I started to cry: it was, in all sense, the very best possible news. Servers and partons buzzed around me, giving me furtive looks – when strangers cry in front of us, best to just ignore it. But I didn’t care: my friend was alive and well and had another amazing shot in life. I cried happy tears.

When I saw my friend the very next day, while she was still recovering from full-body anesthesia, we celebrated instead! We celebrated another chance at life, and remembering what is truly, really important. And so, with that in mind, I hope your weekend is filled with joy and goodness. Take the time to make note of what’s truly important.

Here are this week’s links!

Guy’s wife gets drunk, tells him a joke, and he animates it. Not since Drunk History have I seen something this awesome produced out of drunkenness.

Within the conservative ranks, disagreements, fissures on immigration policy.

A disturbing report of sexual assault on the rise in the military.

A less controversial use of drones – I like this one.

Behold the power of catvertizing. “Nobody wants to see ads anymore. They want cat videos.”

One-third of all US honeybee colonies died last winter. I am obsessed with bees and can’t stop talking about them. Also, this makes me very sad.

How not to die. So important.

Great new use for Viagra! Keeping flowers, um, up for twice as long.