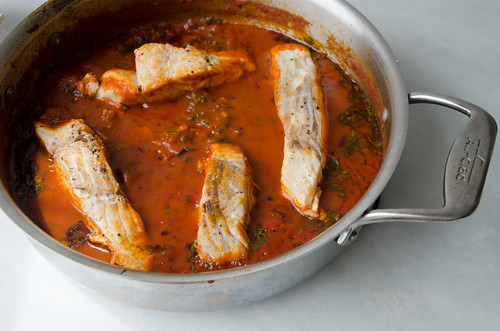 I’ve been thinking about this space in the last few weeks: how it changes with time. Life, itself, isn’t static, so it would be intuitive to think of this as a dynamic space. A year ago, Friday’s links didn’t exist, and today they do. I’m all the happier for it – I hope you are too.

Sometimes I post frequently; other times, not so much. Last summer, when I was in the throes of finishing a cookbook, I didn’t post much. I was too immersed in heavy writing and editing, and my husband and I ate a lot of “toast with things on top” and eggs made whichever way, both of which grew tiresome rather quickly. This upcoming month, in addition to some work I’ve been doing (and loving), I’ve picked up a private chef gig, and there might be another fun project on the horizon. So I might not be posting frequently in June, or maybe I’ll post about what I’m cooking for the private chef gig because these will be the types of things that will reheat rather well and should be a boon for a busy home cook. Friends, I hope you’ll forgive me for poorly lit iPhone photos should I do that, because the last thing on my mind in June will be a well-shot, well-lit, well-composed photo.

The infrequent posting could also suggest lack of interest or commitment to this space. But it’s actually quite the opposite: I only want to write about things that I think you ought to cook right now, without any delays; delicious and, for the most part, straightforward food. Sometimes, I’ll test recipes all week and they’re fine and good, but not particularly blog-worthy. It’s just regular dinner, folks, protein, grain, veg – you know the drill. Sometimes, the testing of a particular recipe takes months to perfect (there’s one on rotation like this right now – grrr). On occasions when I come across fussy recipes that are well-worth the extra effort, I save them for the kind of leisurely cooking when I can spend the whole day puttering in the kitchen. They tend to be weekends, but even Saturdays and Sundays can suddenly become full of those weekend activities like picnics and museums and hosting friends, and being outside in this glorious weather, because who wants to slave over a hot stove on a gorgeous spring (or summer day)? What you need is a reliable arsenal of recipes that will produce stunning results with minimal time and effort. In other words the recipes will have high culinary ROI. 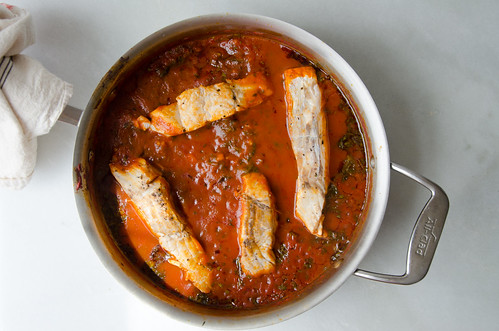 When I worked in finance, ROI was a term we used to toss around frequently. ROI stands for “return on investment” and denotes investment efficiency. To calculate ROI, the benefit (return) of an investment is divided by the cost of the investment; the result is expressed as a percentage or a ratio. Did I put you to sleep yet? Want to go through an ROI example? If you spend ten dollars on a stock and it makes you a hundred, that’s pretty good ROI. If you spend a hundred and then the stock plummets precipitously — your ROI is poor. You get the idea.

Old habits die hard, and so I like to think of cooking (and not just investing) in terms of ROI. I like to divide cooking into two categories: weeknight and weekend. One is practical, efficient, realistic within a short time frame; the other – lofty, leisurely, ambitious.

With cooking, it depends on the factors important to you to figure out if the ROI is good, bad, or just so so. Cost of ingredients yielding a mediocre dish? Not so good on ROI. Expensive ingredients but a dish that knocks your socks off, but takes hours to prepare? Decent ROI, at least in terms of satisfaction, but poor in terms of weeknight eating. Simple, inexpensive ingredients that come together quickly and easily to create something far greater than the sum of its humble parts? That, friends, is what I call ROI bingo.

This spicy Tunisian fish stew is my ROI bingo. It has a short list of ingredients that, for the most part, already lives in your pantry; comes together in under half an hour (including prep time), and most of its cooking time is hands-off. Since I work from home, this allows me to finish up work while my dinner cooks. For those who commute, this means having some down time, an option to, maybe, pay some bills or deal with the less thrilling, administrative household affairs, or maybe just relaxing with a glass of wine catching up with your family or watching the news. Any way you slice it, this fish stew is a weeknight’s dinner dream. 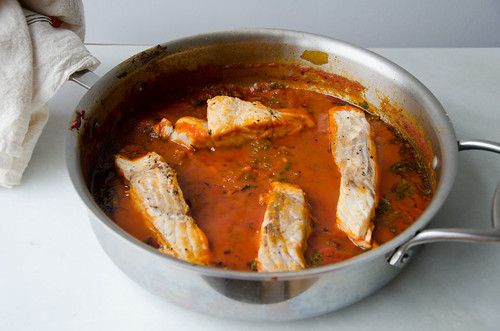 If you feel like busying yourself in the kitchen, well, there are simple sides you can prepare while the fish cooks: make some rice, or better yet Israeli couscous or quinoa. Throw together a simple arugula or watercress salad dressed with a touch of lemon zest, juice and olive oil. The pepper notes will go beautifully with the spicy stew. And should you, miraculously, make enough for leftovers, the fish is fantastic the next day, served cold over some rice or what-have-you. I know how poorly fish keeps for leftovers, and I’m generally not a fan. But Andrew and I had it as lunch one day this week, and the word we had for it was – wow. Like I said, ROI bingo. (Also, can you tell this will make our regular weeknight dinner repertoire?)

I found the recipe in last month’s (I think! I’m so behind on reading) Saveur. Gabriella Gershenson, whose writing I’ve loved for many years, traveled to Israel and immersed herself in the kind of food that I could eat every single day. I could only dream of such a trip. The recipes that came with the article, I clipped every single one and now they await my attention. This stew came to Gabriella via Lior Lev Sercarz, the genius spice magician behind La Boite a Epices. I’ve been a longtime admirer of Sercarz alchemy and his unmatched ability to create the most delicious spice mixes, and I even got to talk to him when doing research for my a cookbook I was working on last year. I switched out a few things, but mostly the recipe is perfect as is. I wanted to use cod for the stew – it’s a meaty texture I really like in hearty fish dishes. My local produce store was out of Thai chilies (which never ever happens), so I used the jalapeno that was languishing my crisper, but if you have a sensitive to heat palate, perhaps you want to start with 1 Thai chile or ⅓ of a jalapeno because the stew turns out to be quite spicy. If you hate cilantro, perhaps a mix of parsley and mint will do the trick? When the stew cooks, the most amazing smell permeates the kitchen, (I know, fish stew smelling amazing?), and lingers in the most delightful way.

Combine fish, juice, salt, and pepper in a bowl; set aside. Heat oil in a 12-inch skillet over medium-high heat. Add garlic and chiles, and cook, stirring, until soft, 1 to 2 minutes. Add tomato paste, and cook, stirring, until slightly caramelized, about 2 minutes. Add cilantro and 1 1/4 cups water; and bring to a boil. Reduce heat to medium; cook until sauce is slightly reduced, 6 minutes. Add fish, skin side up (if it has skin), with its juice and cover. Cook until fish is done, 18 20 minutes.