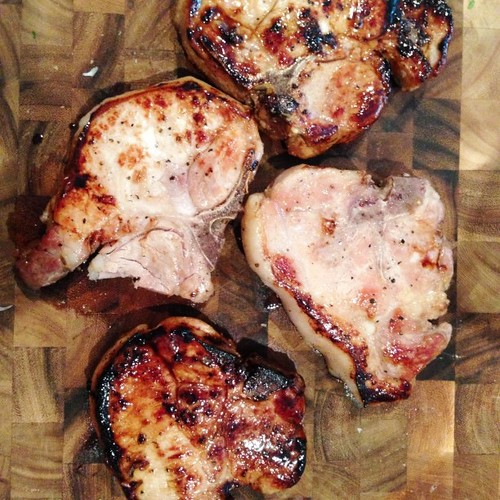 A few things here that I want to say real fast before work swallows me whole for the day.

1. I’m sorry for posting traif. While we’re not exactly a kosher household, pork rarely makes it on our plates save for bacon and prosciutto, aka, “meat candy”.

2. Andrew and I celebrated our one-year wedding anniversary, and I guess we’re no longer newlyweds, except I refuse to believe it and whenever someone tries to inform me of the actual time frame that defines the term, I just put hands over my ears and sing myself a song. Despite the insane amount of work on my plate, I vowed (the day before our anniversary, as Sunday was my private chef day) to not even think about work for a day, and that’s exactly what we did, spent a whole day hanging out in the city eating oysters and farmer’s market strawberries. It was swell.

3. Two days ago I worked out next to Jaime Lannister, aka dreamboat Nikolai Coster-Waldau, and almost fell off my treadmill due to excitement.

Apparently Jaime (I refuse to refer to him by his real name)*, is shooting a movie in our neighborhood in Brooklyn, and I would just like to add that I hope this movie shoot takes forever.[wink]

For the most of my workout, I was so excited, I could barely speak. And what was even more puzzling to me was that the three other people in the gym with me at the time, apparently, had no idea who he was. The woman I was running next to on the treadmill looked at me as if I was having some kind of a seizure.

“A Game of Thrones character!”

“Oh, I don’t watch that,” she said putting emphasis on “that”. As if that was something so terribly beneath her. Her upper lip curled up in disdain, “I hear it has dragons.” Again, with the emphasis on dragons, in a manner that pretty much defined me as a magic-loving-dragon-obsessed that person.

A friend of mine wrote on my Facebook wall that I should’ve offered him a hand (get it? hand? heh) but I was all, please don’t let me fly off the treadmill in excitement or trip walking past him as I’m prone to do. 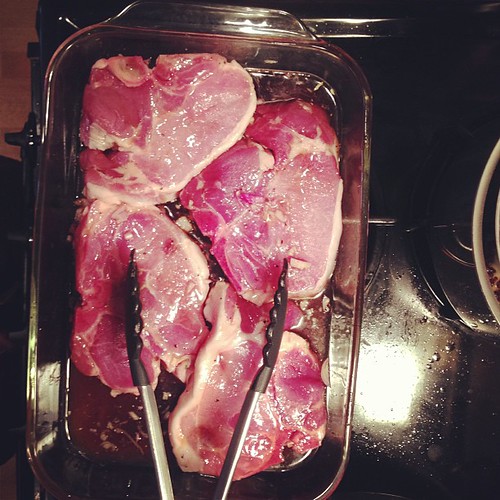 Anyway, Jaime Lannister sighting aside, and the subsequent (and miraculous) avoidance of injury in his presence (thank you, universe!), I’ve coming up on my last week of the private chef engagement. It’s been a fun, challenging, maddening ride. Not because of the work itself, but all the other work that is currently on my plate. Edits aren’t even half of it. It’s all good and exciting stuff, but even with all the good and exciting stuff, I’m just a mere mortal with a finite bandwidth, and it’s this bandwidth that is being challenged right now in ways it never has been before.

I made these pork chops for my client last weekend. I should probably say here that normally, I am not a pork chop fan. They are so often as dry as cardboard (even in great restaurants), that I’ve been weary of the cut. But I wanted to throw some protein variety in the menu and these pork chops in Bon Appetit looked perfect. After I made the chops, I cut myself a tiny piece to make sure they tasted good, and I regretted, immensely, that these were going to a client and not onto our dinner plates that evening.

The caramelized marinade, sweet and savory, made for a perfect complement to the chop, which was moist, juicy – the opposite of my common pork chop complaints. The easiest marinade (you can make it the night before), and the fastest cooking time ever (in under twenty minutes, there’s a delicious pork chop on your plate) – make these a winner in my book over and over and over.

So, now that I think about it, maybe I’m not that sorry I made traif; I hope you can forgive me.

*I think I should probably fess up that my phone ringtone is the Game of Thrones theme song. #dork

I kept the ingredients same, mostly, but expanded a bit in the cooking instructions – providing a little more color where I felt it was warranted. I only took out vegetable oil in favor of grapeseed oil because I prefer to cook with it. Also, I wanted to use my palm sugar (which I get on Amazon) in place of brown sugar. Both work, but light brown sugar might be more easily available to most folks. These cook very fast, making them an ideal weekday dinner option. I recommend having either sides prepared beforehand, or have something that comes together while the chops rest. Having said all this, there’s no reason not to serve them at your next, fancier dinner party – they cook up to be so much more than the humble sum of their parts.

1. Whisk shallot, sugar, fish sauce, vinegar, and pepper in a shallow dish. Using a fork, pierce pork chops all over (to allow marinade to penetrate faster) and add to marinade in dish. Turn to coat. Cover and let pork chops marinate at room temperature, turning occasionally, 20 minutes. [You can also marinate the chops in a plastic bag, 1 day ahead, refrigerated. Turn the bag occasionally.]

2. Remove pork chops from marinade, scraping off excess (reserve marinade for sauce). Scraping off is important – you actually want as much of the sauce off the meat as possible, because when you cook the chop, the sauce burns to a black crisp.

3. Heat oil in a large skillet over medium-high heat. Lightly season pork chops with salt. Cook until browned and cooked through, about 4 minutes per side. Let pork chops rest 10 minutes before serving. Should the residual marinade start to burn, lower the heat tiny bit and add a small splash of dry white wine (I had Gruner Veltliner in the fridge from the night before).

4. Meanwhile, over medium heat, bring marinade to a boil in a small saucepan and cook until reduced to 1/4 cup, about 4 minutes. Watch the marinade, it will bubble and foam and could become too thick in an instant. If you’re in doubt, remove the pot from heat, let the bubbles subside and check to see if if the sauce is of syrupy consistency.