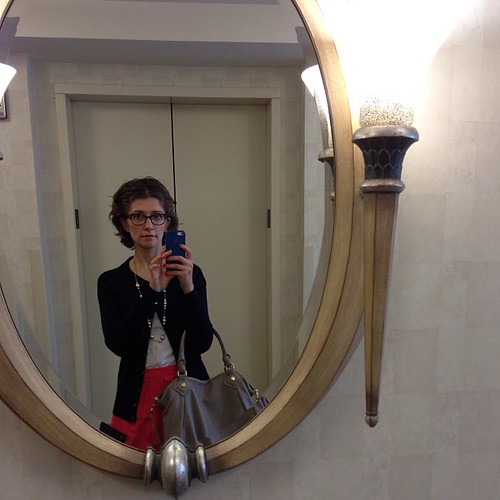 Happy Friday, folks! I just got back from a dynamic but exhausting three-day work trip to San Francisco area and back. As in I took a 7am flight to SFO on Tuesday and returned on a 7am flight back to JFK yesterday. If you happen to fly to San Francisco from New York, I can’t recommend Virgin America enough: nice, spacious seats, plugs for your computer (for each seat!), individual tv’s, wireless that actually works (I can’t tell you just how many airplane trips I’ve taken when wireless was down), and also the Virgin terminal at SFO is amazing: plenty of tables with with outlets, free wireless, an organic cafe with a juice press… I could go on. Oh, and that picture above? That’s me going to a business dinner Tuesday night. With literally ten minutes to change, I think I did okay. Minus the hair. The hair, definitely, needs a trim.

Outside of frenetic travel, I’ve been (quietly) working on some projects which have been keeping me busy – I hope I can share some of them soon.

Not too many links this week, due to a hectic travel schedule and inability to read much, but I managed to collect some – I hope you enjoy them. Wishing you a restful weekend. I, for one, need it badly!

Think what you want about Bush Sr., but will you take a look at those socks? Stylin’!

I was a huge fan of Jack Handey’s “Deep Thoughts”. Now, he’s got a novel coming out. This quote, in particular, on Al Franken (former SNL cast member and current Senator) that made me chuckle.

“I’m sure he’s a fine senator,” Handey said finally. “But he’s such a great comedy writer, it’s almost like . . . Mark Twain deciding to be a florist.”

Make your own eco-friendly (and nice smelling) anti-moth sachets.

Health insurance rebate checks are in the mail – further evidence that the Affordable Care Act is helping Americans save money.

Oh, Ken Cucinelli, I have no words!!

The brilliant Frank Rich on the controversial Rolling Stone cover. Spot on, as usual.

Liz Cheney (yeah, as in Dick Cheney’s daughter) is running for Senate and challenging a popular Republican, Mike Enzi, (this is important and I explain why below) incumbent who doesn’t plan on retiring. Could this be the Lugar/Mourdoch (remember that guy: pregnancy from rape is a blessing?) line up where a well-liked, popular, reasonable Republican loses to a crazy one in the primary? This could be good news for Dems in the Senate, but this could also mean another Cheney on Capitol Hill. Either way, a within-party challenge to an incumbent who plans to run again is a problem.

A disturbing report about New England seeing a rise in heroin use.