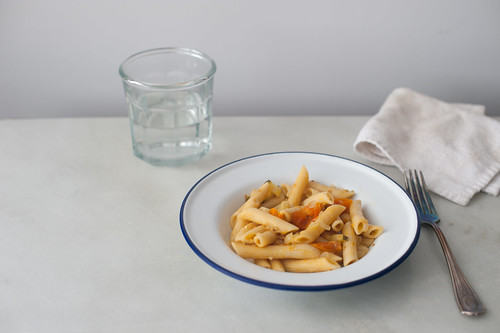 What I don’t want to do is to write a twee post on how amazing this dish will be. I want to be all, Ok, so we’ve known one another for awhile and you just have to trust me on this, m’kay? Is it delicious and will you want to eat it on a weekly (if not a more frequent) basis? I’m pretty sure once you’ll try it, you’ll answer yes. But do I want to rhapsodise about it and use hyperboles? I’m just not in the mood. Lately, I’ve been feeling very small-d democratic about food, very pedestrian.

In a busy household such as ours, and we’re not even busy-with-kids kind of busy, what I appreciate so much more than having time to test a recipe, is having a homemade dinner with Andrew as often as we can make it happen. Most of the time, we can do it about five days a week. That’s not bad, right? And while I’d prefer to be in the kitchen day in and out cooking for you, I’ve this pesky thing called rent and work has been piling up mountain high. What’s up, summer – aren’t you supposed to be all low and slow?

With all the projects I’ve been working on these days, my real goal is to put dinner on the table nightly. Andrew and I will eat, have a couple of beers or some time, and eat a lot of watermelon for dessert. Sometimes, we’ll vary it a little, skip the watermelon, and go out for ice cream (crazy kids, we are!). Because until dinnertime, I am going, going, going, often starting at five in the morning, I don’t zero in on cute accessories and styling when I’m cooking. For me, cooking is a time to transition out of whatever’s been stuck on my brain all day; a time to decompress and relax. Also: I want dinner, man, and I want it to be good.

I realize I’m not selling this very well to you, but if I may, just for a moment, stop gilding the lily and just level with you here. This is pasta with cherry gold tomatoes and onion. It smells faintly of basil and thyme and fresh, young garlic. In other words, it smells of summer. Late golden light, glasses of rose, flip-flops and Adirondack chairs kind of summer. It’s also the kind of thing that, if you follow the cooking instructions below, you’ll get the kind of pasta dish you’re used to getting in trendy, popular, modern Italian restaurants — perfectly al dente, enveloped in a marvelous sauce, fresh and bright. 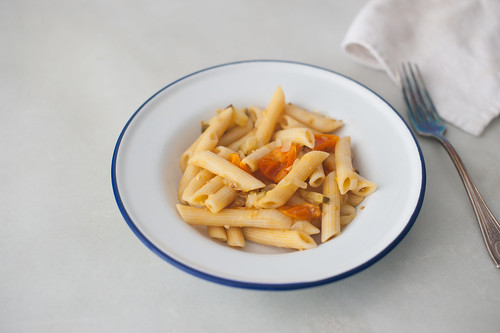 I’ve been playing around with a version of this recipe for a few summers now (it varies as I add things to it), but it took Bon Appetit’s latest issue to help me nail it. Their trick? Sherry vinegar, though red wine vinegar will work well also. In a snap — the bracing acidity of sherry vinegar pulls the dish together like nothing else! The recipe, almost identical to mine, minus clove and star anise which felt wintry to me, isn’t overly original (let’s not kid ourselves): pasta with fresh, slightly cooked tomatoes is nothing new. Two years ago, the magazine featured a strikingly similar dish by Mario Batali, as you’re reading this, nonnas all over Italy are probably making a version of it in some way or another. So why bother writing about a dish so elementary?

You might have heard about a cookbook that came out last month called Franny’s: Simple Seasonal Italian. Written by Francine Stephens and Andrew Feinberg, the proprietors of the eponymous, famed restaurant, and Melissa Clark, it’s a book that’s useful not just for its recipes, which are delicious, by the way, but the great cooking tips you get from reading it. I was really lucky in getting to work on the book some time ago: testing some of the recipes, and it was the education that I got out of it that’s perhaps the most valuable.

For example: cooking pasta. Now, I’ve been sitting on this tidbit for well over a year, but I didn’t feel it was fair to share it because the book hadn’t come out yet and that’s where I picked up this little gem. Here goes: Andrew Feinberg has you cook the pasta almost to the point of al dente but not quite. Because you finish cooking the pasta in the sauce, along with a glug or two of pasta water, if you get your boiling pasta to al dente and then finish is in the sauce, you will wind up with somewhat overcooked, gummy pasta. But if you take your pasta out of the boiling water not when it’s done but when it has another minute or two of cooking time left it, you let it be perfectly cooked, not overcooked, by the time it reaches your plate. How to figure this exact moment of when to take your pasta out of the water is a matter of practice. You’ll have to stand over the pot of pasta and keep tasting it until you feel the moment is right.

The trick of draining the pasta before the al dente point was a lightbulb moment for me. Perhaps it might have been obvious to everyone, but to me, who didn’t grow up in an Italian pasta-savvy household, this was pure technique gold. And I hope that it helps you not just with this recipe here, but with every pasta dish you’ll cook from here on out.

And so… Make this pasta. Tonight. The end.

There are many ways you can put your own twist on this. Sometimes, I have a lonely ear of corn lying around and in it goes with the tomatoes. Last time I made this, I have half a zucchini left and I chopped it up and threw it in there. Think of light, crisp summer vegetables that will go well with it, and that you’ll like, and feel free to improvise.

Heat oil in a large skillet (large enough to hold your cooked pasta in the end) over medium heat until it shimmers. Add the onion and cook, stirring often until soft but not brown, 6 to 8 minutes. Add the garlic, basil, and thyme and cook, stirring often, until fragrant, about 2 minutes. Add the tomatoes and vinegar, and cook stirring occasionally, until tomatoes release their juices and a sauce forms, 10 to 15 minutes. Discard the herbs and season to taste with salt and pepper. If you made this slightly ahead of the pasta, you can turn the heat off and let the sauce sit while you finish the pasta.

Meanwhile, cook the pasta in a large pot of boiling, generously salted water (it should taste like the ocean), stirring occasionally, until almost al dente but still a little firm to the bite. Reserve 1 cup of the pasta water and drain the pasta.

Add the pasta and 1/2 cup of the pasta water to sauce in the skillet. Return the skillet to medium-high heat and cook, tossing and adding more pasta water as needed, until the sauce thickens and coats the pasta, about 2 minutes. By now, the pasta should be done perfectly al dente.

Divide the pasta across the bowls and sprinkle with some grated cheese. Serve immediately.