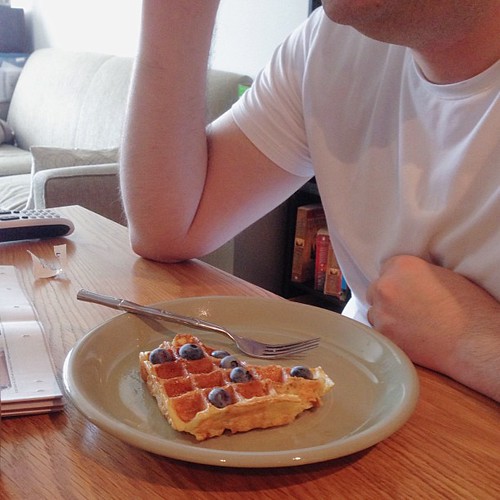 I’d like to talk about waffles today. Or rather, I’d like to talk about leisurely breakfasts and lazy weekends, something I haven’t been experiencing lately and have rather missed. The kind of weekends when you find yourself, at 2 o’clock in the afternoon, still reading the in your pajamas, dirty dishes in the sink, news in the background without a care in the world. It’s been oppressively hot in New York lately, so staying in the cool of air conditioning and eating waffles while reading the paper really is a fine way to pass your Sunday.

Which is exactly what we did over the holiday weekend. I had handed in the copy-edited manuscript back to the editor; I huffed and puffed and got another project I’m working on to a point where I was proud of it, so I put it to rest for a few days; I finished my PR work on time, and thought it was time to shut the computer down.

I won’t bore you with the details of how I spent two days hanging out with Apple geniuses waiting for them to run all kinds of diagnostic tests on my computer to isolate the problem. I won’t give you the rundown of how I had to explain not once, not twice, not even three times that I knew what things like “hard drive”, “RAM”, “cache”, and “reformat” meant. But suffice to say that if your computer does indeed decide to break down on you, I hope, for your sake, that it picks the kind of weekend when you don’t have anything due, when you can afford to take the time to make sure it is properly fixed. From what I recall, from decades of being a computer owner, computers have a fine way of picking the least convenient time and breaking down on you – the night before your thesis is due, for example, not that this kind of thing happened to me. Oh, wait, it did. 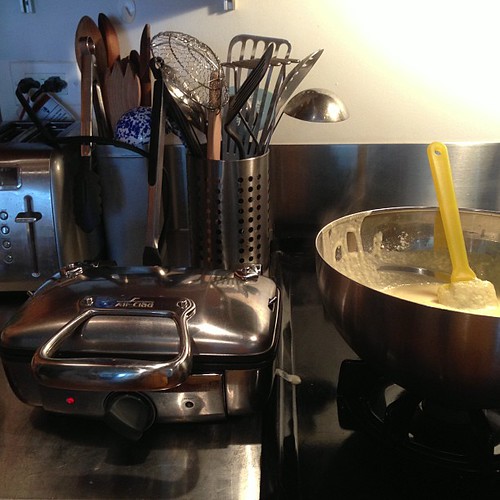 But back to waffles and lazy weekends. You see, much has been written on the subject of those ethereal yeasted waffles from Marion Cunningham’s The Breakfast Book. If you don’t own a copy, run, don’t walk, and get yourself one – this book is a gem, and if you won’t take my word for it, ask anyone in food writing whose opinion you respect, and I guarantee you, they’ll get all breathy about the book. Those yeasted waffles – they’re one of a kind.

The only time when waffles ever taste better to me is when I have them at Marc Forgione’s restaurant. The recipe will be in the book, and if memory serves me right (you’ll forgive me that I don’t want to be digging through recipe files until I get the first pass of the manuscript back) the recipe is pretty similar. I mean, how many different ways can you make yeasted waffle batter? But I think it’s the way the pour the batter that somehow makes the waffles lighter, airier, more lacy. They taste like delicious waffle cloud.

But here’s the tiny, but substantive issue with the whole yeasted waffle batter business – precisely the exact same number of times you remember to make the batter beforehand, is the number of times when you, also, forget to (or are too sleepy to) do it. And then the morning comes, and you realize that for once you don’t have to rush over to the computer and labor for hours (never mind that it’s ailing) and you can have a lazy, truly “Sunday” Sunday morning with waffles, and coffee, and maple syrup, and bacon, and berries.

But, here the predicament: you lack the star of the show – the morning batter. And when you’re used to yeasted waffles, it’s hard to accept anything else.

Last weekend, I was contemplating all this while holding the Breakfast Book in my hand. I wanted waffles, Andrew wanted waffles, and more importantly, we had the kind of morning when we didn’t need to be anywhere or do anything. The kind of morning, when maybe, you go for long stretches without talking because you’re reading the paper, and that silence, that lingering silence, isn’t of the awkward variety, but of harmony and deep comfort. Periodically, you exchange those sections of the newspaper and pass one another more bacon, or berries, or syrup. But the silent rhythm continues. The morning, if you understand me, called for waffles. 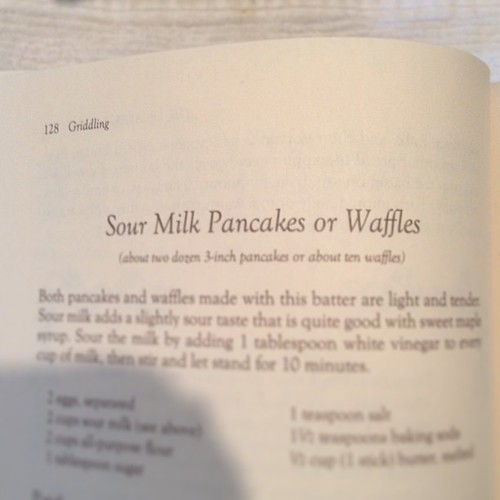 And out of habit (or perhaps it was divine providence), I opened the book precisely where the recipe for the yeasted waffles resides. You see, we’ve made them so often at our house, that the book just opens to that page; it knows to which page hand will go; the spine has it committed to memory. And there, on the opposite page, staring right at me, was the recipe for Sour Milk Waffles, with the batter intended to be made, and used, immediately.

Sour milk, all in all, has a similar consistency to buttermilk. My late grandmother, Valentina, was famous for using sour milk to make these delicious Russian blini (I should probably share them with you, right?). But as someone who lived through, and survived, World War II, in St. Petersburg (back when it was Leningrad), no less, she could not, much to my mother’s chagrin, at times, put any food in the garbage. Moldy bread was scraped free of mold and became croutons; bruised and overripe fruit was cooked into something, or eaten; and sour milk made its way into pancakes, and beautifully too. I got stuck on the idea of waffles and yeasted or not, waffles were happening that morning.

Since most people don’t keep sour milk on hand, Marion Cunningham instructs you to make it: to add one tablespoon of white vinegar to each cup of milk, and let it sit for about ten minutes. In other words, you make instant buttermilk. If you’re reading this, and you happen to be out of milk, but, somehow, are in a possession of buttermilk, just swap the buttermilk in.

Another thing Marion tells you to do is to separate your eggs and fold the whipped whites into the batter right before cooking – which creates a light as air texture of the waffle. Please, do as she says, don’t skip this step and add whole eggs to the batter. Marion is a smart lady: you see, she’s figured out that if you can’t have a yeasted waffle, you’re going to need something that will give a yeasted waffle a run for its money, which means an extra step with the batter. I don’t argue with her – I find she’s usually right.

The sour milk, or buttermilk, really, gives the waffle the kind of nice complexity that it otherwise would be missing; it imparts a tangy, sour notes to the waffles, giving them body and dimension – which isn’t bad considering you put the whole thing together ten minutes prior instead of the night before.

And so we sat, eating our spur-of-the moment waffles, reading the paper, drinking coffee. It was high noon and we were still in our pajamas. We got very little done that day: there was a lazy dinner (burgers) and some ice cream (Van Leeuwen), and a movie (This Is the End). And it was great. Given this lack of planning, I should *not* plan things more often – I kind of like the pace of things.

Sour Milk Waffles
Adapted, only slightly, from The Breakfast Book by Marion Cunningham

I made very few changes in the recipe – why mess with perfection? – but I did streamline the instructions a little bit to make the more linear. I added grams for things (I still owe you grams for baking soda, which I’ll do soon!), and that’s about it. The recipe is perfect as is. A reader made a good note, that I’d like to add here for permanence: modern, American milk is so pasteurized that it doesn’t so much sour but spoils instead. So, given the circumstances, I would recommend making your own sour milk by adding vinegar to milk – and not taking chances.

2. Using a handheld mixer, beat the egg whites until stiff but still moist, for a few minutes. Gently fold the whites into the batter.

3. Add the batter to the preheated waffle iron and cook according to the manufacturer’s instructions.