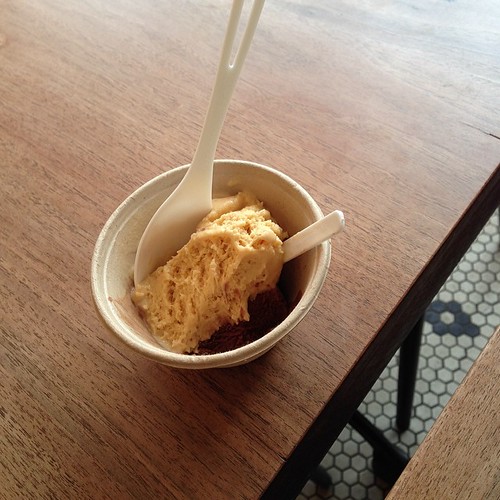 Happy Valentine’s Day Friday, friends! We’re not big Valentine’s Day people here, and our typical way to celebrate is to exchange cards and cook a nice meal at home. We had plans, folks, oh such lofty plans. There was going to be chocolate mousse – Dorie Greenspan’s secret mousse from yesterday’s All Things Considered. But no more. We found out we have a gas leak in our new stove (bump!) and Samsung needs to come and repair it. We called National Grid, and they came and, using their tools, told us where the leak was coming from and gave us a report. Our stove is now shut off as we wait for Samsung repairfolk to come on Tuesday (because that was the earliest they could see us).

Look, I get it, these things happen. Sometimes, during transport, things get a bit unsettled and bits and bobs get loose. But what I found odd during my conversation with Samsung customer support folks was a lack of alarm. “You don’t want a gas stove because you smell gas,” a rep asked me. He didn’t speak English well, and I thought it was an odd job for a man whose job it was to hear customer concerns.

Gas leaks, I know, can be fatal. Thankfully ours wasn’t, but you could definitely smell gas, and we had to shut the stove off. I worked all day in the apartment (like I always do) and was light-headed and a little out of it by the end of the night; we had to disinvite friends for dinner; we’ve groceries going to waste; we’re spending money we don’t have on takeout. This goes beyond mere inconvenience. And while I get that things happen and sometimes new appliances break, what I think makes or breaks a customer’s experience (and what with social media now) is how responsive the company customer support is. So, let’s see how Samsung responds today. Maybe they’ll get someone out to us today or maybe this weekend! I’d be happy if they exceeded my expectations.

I hope whatever you think of Valentine’s Day you have a great day and weekend. I’ve never much made a big fuss over the holiday because it just puts so much pressure on people. Single people to be coupled up, coupled up people to pony up impressive and romantic gifts, and so on and so forth. Our holiday will be spent eating takeout and probably watching reruns of West Wing. That is unless Andrew monopolizes the television and binges on House of Cards. Now, if that’s doesn’t sound dreamy, I don’t know what does.

Is this the end of the college roommate?

The full-fat paradox – whole milk may keep us lean. I’ve been on the full-fat milk wagon for almost two decades now, and I hope more and more people put down the skim milk and embrace the gorgeous fullness of whole milk.

This pretty much sums up how I feel about Michael Sam coming out.

What do the jobless do when benefits end?

Thanks to A Cup of Jo, I can now tie my scarf.

Why writers are the worst procrastinators.

What your Valentine’s Day candy pick says about your politics. I don’t necessarily find this applying to me. Did they get you right?

And last but not least, Happy Valentine’s Day! If you’re in New York, and looking for a place to go, Stefon has you covered!